This Week with TWA: "Nasty Women," Andy Murray and the ATP Finals

It's been a nutty week. Last Tuesday, our country elected a Cheeto Satan to be president. I have more to say on that, but I need to breathe first before I hit send on that post.
Let me tell you something. When you find that you are basically in hysterics for an entire week and find it difficult to hold it together, there's really only one cure for that. Well, playing tennis, yes. But if you can't play tennis, it's better to watch pissed-off individuals play at least.
Which brings me to the Fed Cup. OK. I don't think I've done this yet, but it's time to officially induct Barbora Strycova into the TWA Hall of Fame. I already told you guys that Strycova does NOT CARE. She will fight you, as Kristina Mladenovitch now knows. 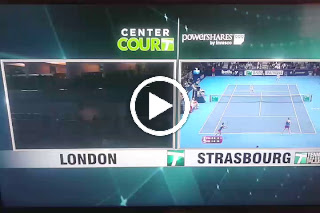 Strycova really didn't have a reason to be mad here -- it was the right play. But still. And then she basically strapped Karolina Plishkova onto her back and carried her to victory. This is why I want Barbora Strycova to be my doubles partner.
The bottom line: Fed Cup had some great matches and it came down to the doubles, so that was great to watch. I want to really love Fed Cup, but they need to fix it so that everyone can realize how great women's tennis is. Well, except Steve Simon, who runs women's tennis. But I guess he's going to need convincing.

Now, you know that I hate to brag. Actually, I love to brag. It's my superpower. But I remember mentioning on this blog a little bit ago that Andy Murray was going to win majors and be a top-tier player. Of course, at that point, he was having a little trouble keeping the whole package together, as it were.
But I was right. Despite the buzzsaw that Novak Djokovic was for much of this year, Andy Murray has emerged as the world's No. 1. Before I talk about how screwed he got for the round-robin portion of this event, we need to pause and appreciate this. Murray is not Roger Federer. He does not have the grace about the court. You don't look at Murray and get the sense that he is a natural. He has had to work hard to be this good. Yeah, yeah, everyone works hard. But at this time in men's tennis history to emerge as a No. 1, with the Djokovics, Federers, Nadals, Stan Wawrinkas -- and the young guns -- nipping at your heels? This is huge for Murray and it's well-deserved and I told you so.
Now let's talk about how Murray got screwed in the round robin.

Even though Djokovic is having a hard time in these matches, his draw is easily the best. The most anyone else in his section has done is a Grand Slam final. One. Poor Murray draws Stan Wawrinka, Marin Cilic and Kei Nishikori? It's a running theme here in the States, but I think you have to consider the idea the system is rigged.