Black Monday (or Thanks so much, Juan Monaco)

Screw the stock market.
This is serious.
Marat Safin, after getting waxed by Juan Monaco, 6-0, 7-6, today in Paris, said the dreaded "R" word. No, not recession. Safin's talking retirement!
"I’ve been struggling throughout my career with injuries left and right. It’s a little bit uncomfortable to find yourself in the top 10 for many years and to find yourself ranked 70 and 30 and 50 ... It’s not really a comfortable position," he said.
He's going to take some time off, try to figure out how a two-time Grand Slam winner (should've been three, Thomas Johansson) finds himself with a record of only 24-24 this season. Or how someone with so much natural ability can lose to the likes of Philipp Petzschner (yes, THE Philipp Petzschner) or Andrey Golubev, a household name.
In Kazakstan.
This is a huge decision for Safin, with far-reaching implications. In his deliberations, he has to consider what could happen to him if he should hang up his racquet:
1. Safin could take the Andre Agassi route: He makes one last push, wins a few more Slams, shave his head and open a school for groupies in St. Petersburg.
2. Or, he could quit right now and film a reality show, a la Mark Philippoussis, called The Color of Love. Safin is presented with two groups of women -- the Blondes and the Brunettes -- and must decide which group is his true love(s).
3. Then there's the Roscoe Tanner road. Safin's mug shows up on The Smoking Gun's Web site after he's busting passing bad checks for million-dollar cars. Prison is no place for such a cute face, Marat.
Hopefully, though, Safin is inspired by the success of his sister, Dinara -- who, by the way, is nowhere near as naturally gifted and has done more with less -- and comes back with a fire under his cute tush.
Posted by Naf at 11:27 PM 6 comments: Links to this post

The week in review

A brief recap of the week in tennis:

1. Venus Williams did something she hasn't done since Wimbledon -- close out a match. She won her second (yes, that's it) tournament of the year at the Zurich Open, beating her nemesis Flavia Pennetta in the final. In the semis, she played Ana Ivanovic. Judging from previous performances from both of them recently, it could have been an ugly match, but both played well. Ivanovic showed this week she's still got game, but it remains to be seen whether she can get -- and keep -- her mind right.
I have to admit to agreeing with Corina Morariu on the Tennis Channel, which is rare only because I can't stand her voice. I can't explain why. Anyway, as Morariu says, Venus insists on standing inside the baseline to receive serve, no matter how hard it is. Because nothing is as intimidating as standing just inches behind the service line and screwing up every single return. Imagine what would happen, Venus, if you *gasp* stepped back a foot or three? You might have room to, oh, I don't know, SWING!
2. Speaking of intelligence, I gotta give it up to Gilles Simon. He fought off something like twenty-eight match points during the week and played a great match against Rafael Nadal in the semis. And here I thought he was just a pusher. That's some pusher, changing spin, direction and speed whenever he wants. He finally encountered a match point he couldn't shake, though. And how about that Andy Murray? (I gotta ask: What is that gigantic blotch on the back of Murray's leg?) Looks like his U.S. Open run was no flash in the pan. Just when you thought things were heating up at the top of the men's game, you've got to make room for more. A Scot, no less. I'm going to guess that one day, Murray will do a little better than Tim Henman at Wimbledon. And the Open. All of them.
3. Roger Federer is relegated to world No. 2 for the rest of the year. Can we agree that he might be the second-best world No. 2 EV-ER?
Posted by Naf at 7:18 PM 5 comments: Links to this post

I don't often suggest this to players (especially not women players, given the lack of depth), but really, Jelena Jankovic, take a week off. Or three.
Jankovic's run this fall has been impressive. She's been great all year, actually. But, who wants to bet that by the year-end championship, she'll have nothing left?
A better question: Who wants to guess how many tournaments Jankovic has played this year? And compare it, to say, Serena Williams?
Here's someone who does what no one else does -- play a full schedule -- and yet comes up empty at every Slam. It's almost not fair, but part of being a consistent pro has to do with taking care of yourself, pacing yourself. If Jankovic has a deep run this week in Zurich, that'll give her about two weeks to recover from playing nonstop for a month.
The word is not "cast". It's "balance". We've seen the opposite happen (ahemVenusWilliamsahem) where certain players take weeks off at a time, then falter in early rounds. Even Williams, though, manages a Grand Slam with her scheduling. It's next to impossible for Jankovic to play every tournament, and still be tough enough to win a major. Kudos to her coaches and mom for making her the world's best. Now they just have to make sure she can stay that way for a long time.
No takers on how many tournaments she and Williams have played this year? No cheating. I already did that.
Posted by Naf at 9:06 PM 3 comments: Links to this post

I remember watching Anastasia Myskina win the French Open in 2004, and thinking right away, "Now here's someone who'll never win a Grand Slam again." And where's Myskina now? Burping her 5-month-old.
It took a little longer, but I'm starting to have that one-hit wonder feeling about Ana Ivanovic. She lost today in the second round in Moscow -- against a talent, Dominika Cibulkova, but for those counting, she has played eleven matches since she won the French Open. She has lost six of them. To lesser players -- at bigger events. Let's not forget Julie Coin, who took her out at the U.S. Open. Or Nathalie Dechy at Wimbledon, which Ivanovic won, after about a year and a half.
I know, I know, she's just a kid. And, yes, she's been dealing with injury. Now that she's better, what's the problem? Tennis is 99.234% mental. Clearly, this is Ivanovic's hang-up right now. But why? Is it a lack of confidence? (After winning a Grand Slam? She must be hanging out with Amelie Mauresmo, also a loser today in Moscow ...) And if so, how do you get that back without winning matches? How do you win matches if you aren't mentally tough?
Ivanovic's got the game, there's no question. Lord knows she's no pusher like Myskina was. But where's her head at?
Anyone else wondering if Ivanovic's a one-Slam wonder? Or is she having a tough time handling the pressure?
Posted by Naf at 10:36 PM 5 comments: Links to this post

Create your own caption ... 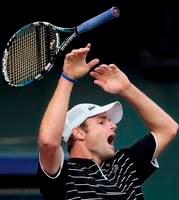 So, the ITF has penalized Croatia for having hard courts that were too fast during their Davis Cup tie against Brazil.
First, yeah. It was obviously the court that allowed the Croats to win, 4-1. As I recall, Gustavo Kuerten is no longer playing tennis. So, is there any surface Brazil could beat the Croatians upon? Ice? No, it's freakin' hot in Brazil.
Second, here's what really bugs me about this punishment. I'm just going to "borrow" this from the story:

Marina Mihelic, the head of Croatian Tennis Federation, said the ITF checked the court three days before the matches started on Sept. 19 and concluded that the speed of surface was indeed above the maximum, but only minimally. Mihelic said she consulted ITF again and it suggested that the court surface didn’t need another layer because it would postpone the matches.

Riight. So, the ITF knew the courts were too fast, and says, "Hey, don't worry about it. Not enough time to worry about it now." At the end of the tie, they take 2,000 points away from them -- after they told them not to fix the "problem?"
I'm not a huge Davis Cup fan, so I'm already slightly biased, I guess. But does anyone else think this punishment is a little wrong? Or a lot wrong?
Posted by Naf at 9:43 PM 3 comments: Links to this post