Therapy with TWA: The rage edition, featuring the United States and he We Speak Not of in This House.

I don't have time for this, OK?
I decided this year, of all years, to do NaNoWriMo again because of this project I'm working on. I want to see if it's got legs, if I can develop it. I have a full-time job. Kids. Husband. I got a tennis blog. I have to play tennis. I have things to do.
But I find I can't write anything else right now, and I know why. It's because I have to Get This Off My Chest.
Last Tuesday, the U.S. held its presidential election. You probably haven't heard about it. It's a very small affair. Anyway, this guy won. Usually, it's the guys who win, so that's expected. But this guy. This guy ran a campaign on hate and fear -- and he won. This guy. This guy thinks that women can have abortions the day before their due dates. I've had babies. They will basically walk out at that point. Crawl. Roll. Whatever. This guy. This guy wants Muslims to sign up to a national registry. You know who else wanted an entire religious group to register? Hitler. This guy. This guy is facing trial for starting a fake school. This guy thinks it's OK to get out of paying taxes. (Can I not pay taxes?) He's an advocate of grabbing a woman by her genitalia. This guy. This guy's wife says he was peer-pressured into saying things about grabbing women by their genitalia by a dude who got fired from his job for standing next to This Guy. This guy. THIS GUY.
This guy beat a woman with an email scandal. This woman. Her name is Hillary Clinton. (Her name can be uttered here. I don't know if she plays tennis, but she is in the TWA Hall of Fame. She lost and came out in the fiercest pantsuit I've ever seen.) This woman has seen more humiliation than someone at her status might ever have witnessed, and a good amount of it at the consequence of her husband's actions, who was president. This woman was the first First Lady in recent memory to take on a major initiative. She got shot down, but she tried. This woman. This woman was a senator. I met this woman the first time she mounted a presidential run. She went to the bathroom and when she came out, there were a bunch of fangirls waiting for her outside, and she took pictures with all of us. This woman was secretary of state when America finally nabbed Osama bin Laden. This woman got blamed for an international incident. It was all this woman's fault. This woman. You want to talk about qualified? This woman was the most qualified person to run for the office of president. Experience. When you apply for a job, they want to know: Are you experienced? Do you know what it takes to do this job? That's true if you apply to Taco Bell. If she applied for Taco Bell, they would tell her she could run everything at Taco Bell.
But this woman? She lost to the cashier at Taco Bell. The racist one who spits in your Taco Supreme.
This is all very distressing, I know. Or maybe it's not. It depends on your perspective. For me? Very distressing.
I've been trying to find solace on the tennis court. I played last week after the election and it was OK. It was 1.5 hours I didn't think about the effect on This Guy on my life. It was two days removed from the day I went from feeling like a citizen to feeling like a target. Have you ever walked down a street, wondering if the pedestrians you passed didn't really want you there, could legitimately swing on you? No? Oh, how nice for you.
I follow a lot of tennis writers and publications. One of them has been particularly jarring lately. Her name is Courtney Nguyen. I want her job. She covers the WTA and she kicks ass at it. I wanted to believe in tennis as my refuge from This Guy, but then Courtney began tweeting, both before and after the election: 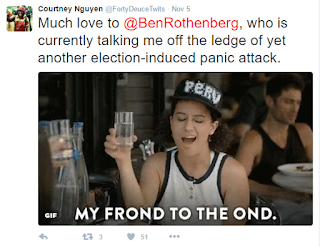 I was with Ben. It's gonna be fine, Court! But then it wasn't.

I don't want Courtney Nguyen's job. She gets to interview U.S. citizens who thought it was OK to elect this guy as president because of their BOTTOM LINE! What. Like, honestly, what. If you're reading this, please follow Courtney's work on social media. Follow her and tell her you have her back. You'd better not do anything other than that. If you see something, say something. On the courts and off. If you see something, SAY SOMETHING. Also Grace Min and Jamie Hampton and all the tennis players who are bold enough to say something because they see something.
If I ever find out about a tennis player who voted for This Guy, I would just ask why. Because Your Guy? Your guy thinks I live in the inner city and that my life is terrible because I'm dodging bullets on the way home. Here's how my kids are growing up: 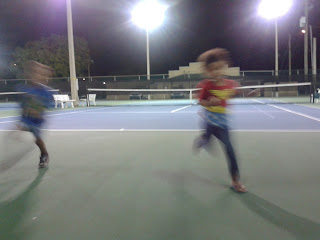 All right, well those two always make me feel better.
It's not my intention to bitch about this for four years. I'd rather do something to ensure this guy doesn't hurt too many people and that this never happens again. A lot of people right now are pleading for some Understanding. I think that's a good point. We all need to understand the consequences of our action -- and our inaction.