The French Open is never easy to predict. But this one is bananas. Just take one look at this crazy men's draw: 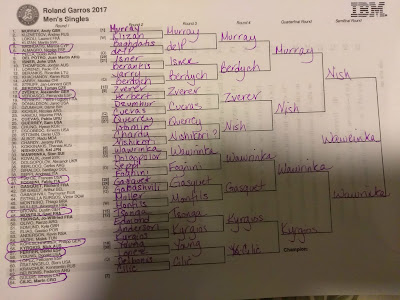 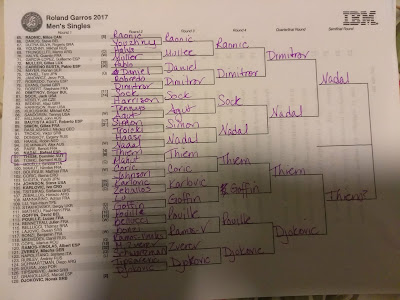 Thank god Roger Federer isn't in this draw. We got about three favorites cropping up just in time -- Rafa Nadal, Dominic Thiem and Novak Djokovic. My heart is with Rafa, but I've got an eye on Andre, er, Novak. We'll see!
Also, a nod to all the really interesting first-round matches in the men's draw. Many of them involve Spaniards, and not Russell Crowe-Spaniard, either. We're talking about David Ferrer and Feliciano Lopez and the like. 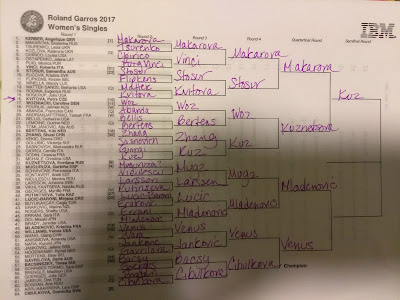 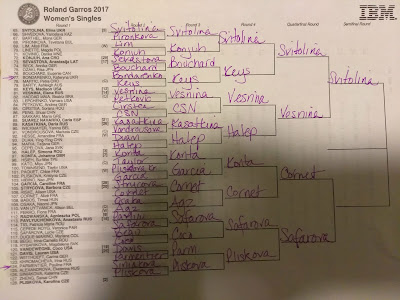 OK, I have to freely admit that the first draw I tried to fill in was the women's draw and the first match you see is Angelique Kerber v. Ekaterina Makarova! I stared at that for a few minutes and went to the men's bracket. This has to be the first time in pro tennis history that the top seed is most certainly NOT the favorite to advance out of the second round. Like, if she wins, it will shock the hell out of everyone.
I also wanted to note here that Pauline Parmentier is still around.
More later. Filling out this draw was exhausting.

Posted by Naf at 3:56 AM No comments: Links to this post

Really slow time here in TennisLand as we go into the French Open next week. Not much happening at all.
Well, OK. A couple of “minor” developments:


1. That was me fangirlling it when I checked my phone at work and saw that Novak Djokovic had hired ANDRE AGASSI to be his coach for the French Open. I'm sorry, I didn't mean to be yell. I meant to say ANDRE AGASSI. I can't help it. My ultimate tennis crush is ANDRE AGASSI. Let me tell you something. The first year I was a tennis fan, I stayed up until 7 a.m. EST to watch an Australian Open semifinal between ANDRE AGASSI!!!! and Pete Sampras. After ANDRE beat the tar out of Sampras in the fifth set, that was it. He duck-walked all the way into my tennis heart. And now he is joining forces with the struggling Djokovic?! I have one question: Is Gil Reyes coming? He'd better be coming.

2. So for the last month, Rafa Nadal and his fine ass has been tearing up the clay courts, and the tennis talkers-that-be anointed him the French Open favorite soon after he won Monte Carlo. And then ... well, what had happened was Dominic Thiem. Last week, in Madrid, he lost a tight one to Nadal. Then. In Italy, he beat Nadal in straight sets, and advanced to the final against Djokovic, who, until now, had been working diligently on his little molehill of mediocrity. But Djokovic rolled in and beat Juan Martin del Potro and Thiem on the way to the final ... where he lost to Alexander Zverev?!!!! I say all of this to say that the French Open should be ... entertaining.

3. We're gonna call this paragraph SHUT UP JOHN ISNER. OK, so Roger Federer decided last week that he was not going to play the French Open, and naturally, everyone began to think it was because Nadal was killing it. That's ridiculous, but more ridiculous was when Isner got involved. First of all, Isner says that he would never miss a Slam because he was saving up for the next one. Says the guy who didn't go to Rio to save himself for the U.S. Open THAT HE DIDN'T WIN. Secondly, we're gonna need a headline fix on this story:

Oh. OK. Hey, Google, can I get a definition of the word "rival?"

I am just saying.

4. Maria Sharapova has finally done something I can respect. After being passed over for a wild card of any kind into the French Open (meaning she can't play -- ranking's too low) she announced that she would play in the qualifying draw at Wimbledon. Look, you get busted for doping, don't look for gifts. Play your way in if you think you've got it like that. Does Sharapova have it like that? Could she get through a qualifying draw and then deep in a main? Probably, gang. Probably.

Posted by Naf at 4:13 PM No comments: Links to this post

After careful consideration of Genie Bouchard's application for membership to The Official Tennis with Attitude Commission, I have decided to advance it to the second stage. Her first attempt last year was blocked for having all the talk and not the action to back it up. This time, she straight-up called Maria Sharapova a drug cheat who should be banned for life. Just before meeting her in the second round at the Madrid Open.
I couldn't watch the match, but kept a watchful eye on Twitter all day at work, and when I saw that Bouchard had pulled out the win, 6-4 in the third -- all I can say is that I have never been so gleeful at someone's defeat. Especially when I saw what I was waiting for (h/t to @hypotemuse on Twitter):

The cold-fish handshake, accompanied by the dismissive scold-stare by Bouchard. Oh, I tell you, I was gleeful. And that's when I realized I needed help.
I am not at all happy that Maria Sharapova is back in tennis.
I am trying to be a grown-up and be reasonable about this. Yes, it's good for tennis, especially for that green bottom line. She attracts people and attention. The more attention tennis gets, the better. Right. I know. And I get that she served her time for taking a banned substance and that when you do something wrong, you should be allowed to do the time and move on. She's done that.
She's also -- ever since this happened -- been walking around acting as though she hasn't done anything wrong, that this is Someone Else's fault and that she was simply caught in the middle. She has threatened legal action and essentially demanded that people like Bouchard not say bad things about her. She accepted a wild card into an event that had already started before she was cleared to play again. And this is really where I struggle. Wild cards are for people who are not banned for drugs or other illegal activities. She was ranked #262 in the world BECAUSE OF THE BAN, NOT AN INJURY. !!!!!!
Whew. Had to take a minute. I'm back.
But here's the problem I have: Sharapova is not going anywhere any time soon. She's not going to walk into a press conference one day this week and express any real regret for the situation she put herself into, and apologize on behalf of her ignorant agent who chose to defend her by insulting the careers of two pretty good players. So what do I do?
Nothing, basically. Sometime around last November 8, I learned that not everyone plays by the rules, and they still get to play and they still win. Sometimes, you can get banned by your sport, and go to Harvard, write a book, and get welcomed back to your sport with a wild card that you don't deserve. Sharapova might even win another Slam, and maybe even this year. And she will feel vindicated and everyone will say that this is why she's great for tennis and we'll forget she took a "heart medication" and apparently never told most of her team about this, which is probably why no one told her it was banned for 2017 -- no one knew she was taking it. That woulda helped.
There I go again. I was hoping this therapy session would end with me finding a way to make peace with the way Sharapova has returned to tennis, but nope. Still mad. Except when I watch this:

Posted by Naf at 4:12 PM No comments: Links to this post

Servin' and Volleyin' 'em Up

Where to start? Maria Sharapova? Not today, Satan.
How about Rafael Nadal Parera instead? A fellow tennis fan friend of mine forwarded me a story from Deadspin with the headline: "The King of Clay is Looking a Little Wobbly." This after a tight first-round match in Monte Carlo and with Alexander Zverev on the horizon, this guy figured Rafa was done for. I told my friend then that the story was basically pablum and was utterly useless in a respectful way: 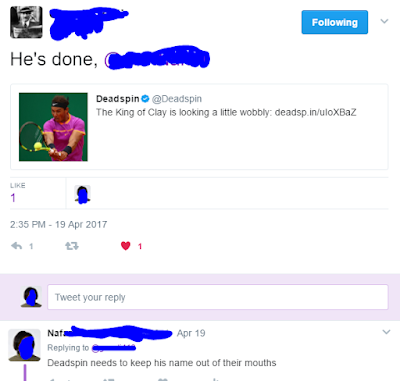 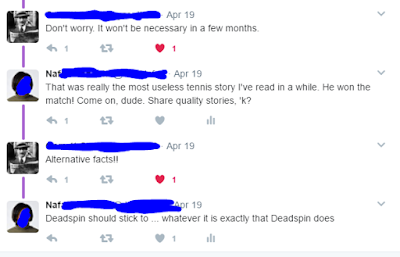 And then Rafael Nadal Parera kilt the rest of the field, even winning Monte Carlo. No, I haven't gotten my apology yet.
Nadal beat Zverev along the way. And then he went ahead the next week and won Barcelona, beating Kevin Anderson and Dominic Thiem in that process. And that three-set match against Kyle Edmund that prompted Deadspin to put on their genie hat? It's the only three-setter he's played since. I mean, damn, who consistently makes it to finals this year, losing mostly to Roger Federer for most of this year and still has to have folks questioning his career?
Hell, he's having a better year right now than three out of the four players ranked above him right now!
Speaking of, so Novak Djokovic! Djokovic has had some issues lately. He beat Andy Murray in a tournament final in January -- and hasn't sniffed the latter stages of a tournament since. The Australian Open didn't go well. He's taken a couple Ls to Nick Kyrgios, which are not bad losses. But Denis Istomin? David Goffin? So yeah, it's been tough. How tough? Welp, Novak answered that for us this week by DITCHING HIS ENTIRE TEAM. All. Of. Them. He revealed the news on his website and one line

kinda made me wonder if he wouldn't have wanted to quote that a little differently.
Seriously, this is a pretty dramatic move and of course, you wonder how amiable this is. You also wonder how long Djokovic will stay on his own. Especially with the French Open coming, and as Nadal and Federer are becoming more of a threat. So this will be interesting ...

Posted by Naf at 12:20 PM No comments: Links to this post