So my last post was a little heated. I had to unload a bit about on-court coaching, and because I am often overtaken by my mini-rages, I lose sight of the good things. I mentioned a few of them early in my last post. Let us hit the way-back button to revisit Indian Wells, shall we? OK!

1. Roger Freakin' Federer. You might recall Federer taking some time off before, needing to rest his bad knee. It was at that moment that the Rolex-sponsored Retirement Watch began ticking in the minds of many. He sat on the sideline watching Rafa Nadal do damage at the Rio Olympics, Andy Murray become knighted and Novak Djokovic assert himself (kinda) as the world No. 1. Ol' Grandpa Roger must have really been motivated by what he was seeing. Even after the man won the Australian Open with his fishing buddy Rafa, commentators said, "Well, this is it for these guys. This might be the last time ..." And then Roger played Rafa in the fourth round here and beat him so bad I was wincing. Now I'm a big fan of Rafa and his sexy ass. So it was a tough one to watch:

Still, Federer looks unbeatable right now. He's running around tagging backhands like a teenager while Novak Djokovic and Andy Murray are pulling out of Miami. And let's give Stan Wawrinka a good amount of props, too. He made the final entertaining and had a couple key points gone his way, it might have gone to three. He also gave possibly the most memorable runner-up speech. So memorable that Mirka is probably gonna find him and wallop him upside the head with her purse.

2. I just don't even know what to say about Elena Vesnina.

3. Do you know what Maria Sharapova has done since she was ordered to serve an 15-month drug ban from tennis? She has:

a. gone to HARVARD UNIVERSITY for a specialized business program (that has a no-drug policy but whatever am I right?)
b. written and secured a publisher for her memoir
c. retained many of her sponsors, including Head, which congratulated her for getting time taken off her ban
d. appeared on the cover of Vogue magazine
e. received a wildcard into the Stuttgard tournament, which begins before her ban ends, but barely. That means organizers held a spot for her and set it up so she can start as soon as her ban is over, two days after the starting bell.

This should be obvious.
If you're someone, like me, who thinks she violated the rules and did it with some intention, then you're wondering how a drug cheat like Maria Sharapova ends up with the world on a string. Cheaters aren't supposed to win. But here Maria is, running the tables. Like big time. Even the WTA is embracing her with open arms. Well, at least the WTA's social media manager is. Er, was: 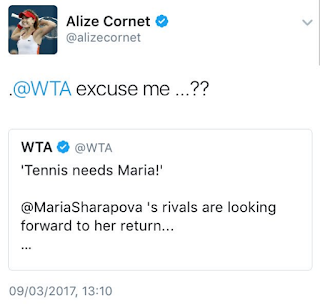 Good thing the WTA deleted this tweet. Wise move. Heck, Dominika Cibulkova probably hadn't even seen that yet.
I don't say this every day, but Alize is so many of us right now.

4. The secret plot to make Bernard Tomic and Nick Kyrgios love tennis and stop being babies: I'm gonna start with acknowledging that this is some real conspiracy-theory stuff I'm about to drop. That's not me usually, but I want this to be true so badly. So you know how Rafa Nadal usually plays doubles (when he plays doubles) with fellow Spaniard and gold-medal champ Marc Lopez? So this time, he took on Tomic. And then Nenad Zimonjic who usually plays with someone who will help him win a title, played with Kyrgios. And frankly, I have never either sourpuss happier on a tennis court. Also, if you're a sourpuss, you're less likely to be one while playing against legit Grand Slam winners. You will be on your best behavior. But still, this is odd for major champions to choose such unlikely partners. Even Nadal's countrymen had no idea why he was playing with Tomic. Now Nadal says it was because they were supposed to play together in Australia, but couldn't. OK, fine. But I think Nadal and Zimonjic did this for the good of the game. They might have even hatched this plot together. They know that Tomic and Kyrgios have the potential to be the future of the game, and because they're thinking big-picture, they're taking them under their more-experienced wing to show them that instead of murdering your racquet, you might consider taking a deep breath instead. So that's my theory. Rafa and Zimonij are geniuses, and not the evil variety, either,

OK, I finally figured out something to say about Vesnina. You know how people say, "Youth is wasted on the young?" It's meant to say that young people squander their physical assets or their time and when they're older they have less time and limited physical abilities. Vesnina is 30. She and her fellow Russian Indian Wells finalist Svetlana Kuznetsova (31) have been around for a long time. It's probably easy to think, even to yourself, that you have the ability to go through a murderer's row to earn your first tier 1 WTA singles title, especially when you see folks like Garbine Muguruza blow by and win a major before she's 20. But look at how Muguruza struggles to be consistent now. I think Vesnina, Kuznetsova, the Williams sisters, Nadal and Federer are living in tennis' sweet spot right now. They have age, but they also have experience, and as Eminem would probably say, their feet aren't failing them now. Youth is nice. Thinking young is impressive, too.
Posted by Naf at 8:54 AM 4 comments: Links to this post

The rage edition: Indian Wells Can't Be the 5th Slam for This One Reason

Let's not talk about how Stevie Wonder must have pulled together the men's draw, with three of the traditional Big Four on one side of the draw. Let's also not point out that the one guy who had a whole half of a draw to himself lost in the first round, while the other guys are still playing. (COME ON RAFA.) Let's not even go there about how Venus Williams is playing the smartest, and by extension, the best tennis of her career. The other thing we've got to hold off on is that all the big boys are playing doubles and drawing crowds, and veterans are playing with hotheads and if it's a strategy, it's a beautiful one and it just might work to loosen the dour temperaments of the young Aussies.
And of course, we can't talk about the big controversy of whether a player serving a drug ban should be getting wild cards into tournaments. (no. Not her and not for a tournament that starts while she's still banned and hold a spot for her that someone who presumably hasn't been banned for drugs now can't have. But we're not talking about that now. Just ... just focus, OK?) We can't talk about all the great things about Indian Wells because of the one thing that's really got me freaking pissed right now. It's not a topic that's gone uncovered here at TWA, and we are gonna talk about it again now. This friggin' on-court coaching that only the women have access to. Instead of me just going on about this, let's just talk about all the "good" that's come of it here at the "Fifth Slam."
Kayla Day. Day is a 17-year-old American who I just saw for the first time this week, and she has got some serious lefty GAME. Last week, she was beating the tar out of Garbine Muguruza. Day really had her on the ropes, too -- up a set and a break in the second. But then it seemed as though Muguruza woke up and realized that she did indeed have a match this day and that in fact it was happening at that point in time. So she stepped up her game, which threw the teenager for a bit of a loop.
COACH CONFAB!

Day: "She's hitting great first serves now. I can't even touch them!"
Coach: "Yeah, you have to give her that. but focus on the serves you can hit and do what you can."

I'm paraphrasing. But isn't this information that Day, if pressed, could have told herself? Yeah, sure, Naf, but the real question is did it work?

Later in the third set, as Day finds herself in the process of getting wiped off the court, she summons her coach again.

Oh, wait, sorry. That's just what Day heard just before she went and double-faulted the match away.
So, no, it didn't help. It's also not his fault. But what's burning me up is that these women are getting advice that they should already know.

Speaking of "blah blah blah," let's move on to Madison Keys, who called Lindsay Davenport out when she was having trouble closing out her first-round match. Later, Keys acknowledged that she couldn't remember what it was Davenport had said. "I just needed to calm down."
OK. So we have a pro player who can't settle herself down during a match, even at the risk of choking at least the set, and maybe the match away? Funny, if she were a dude, Madison would just have to go ahead and lose that match ... or figure it out on her own. What. A. Concept.
This alone should disqualify Indian Wells from any premier status as a tournament. Allowing on-court coaching a) gives one half of the tournament's participants an advantage based on gender b) advances the idea that women are mentally weak and c) does absolutely nothing to make Kayla Day a better tennis player. If tennis is really 99.9207 percent mental, why offer a crutch? The ability to deal with stress and pressure is literally at the heart of the game of tennis.
In fact, if you're a coach, you should not support this concept or participate in it, unless your endgame is feeding mental enablement. (That's probably not a word. It is today.) Let's just put this in the most basic of terms. Let's say I'm 4 years old. My mom really would like me to clean up the table after dinner. But she really only makes me do it about half the time. Am I going to clean up after myself every time, knowing that there's a decent chance I can get away with her doing it for me? See what I'm saying? If you're a coach, don't you want to get to the point where you don't have to tell your charge what to do? Like, say, at the French Open, where you can't call Mommy or Daddy down for a quick talk?
Fifth Slam my

Posted by Naf at 7:46 PM No comments: Links to this post