So what had happened was, we were sitting at home, just minding our own business, and my husband gets a text.
"Would you play 9.0 if you got asked?"
I shrugged. "Sure," I said, but seriously. Who would ask me? My USTA records are out there for the world to see. Let's be for real.
An hour later, as I was getting the kids ready for bed, he peeks his head. "You need to sign up tonight. They sent you a team number."
And that's how I ended up on a 9.0 team this season, people. Basically, they had a 5.0 player and needed a 4.0 woman to play with him, so they were in a pinch. The match was in two days. As soon as I signed up, I went from psyched to panicked in less than a minute. Here's someone (me) who just played a 7.0 and struggled to figure out how to win it. Now, not only am I playing a 8.0 match in the afternoon, but am also now playing a 9.0 match three hours after that. Yes, that is utterly ridiculous. But you never underestimate the power of a tennis junkie to place themselves in ridiculous situations just to play tennis.
As I was about to leave the house, my three-year-old asked me where I was going. Any mother who also endeavors to do things for herself knows that question and the guilt trip forthcoming. I told him I had to play tennis but I would be right back. (... in six hours.)
Instead of the usual clinging-to-the-leg that usually happens next, my son turns, grabs something and gives it to me. "I want you to take this with you." 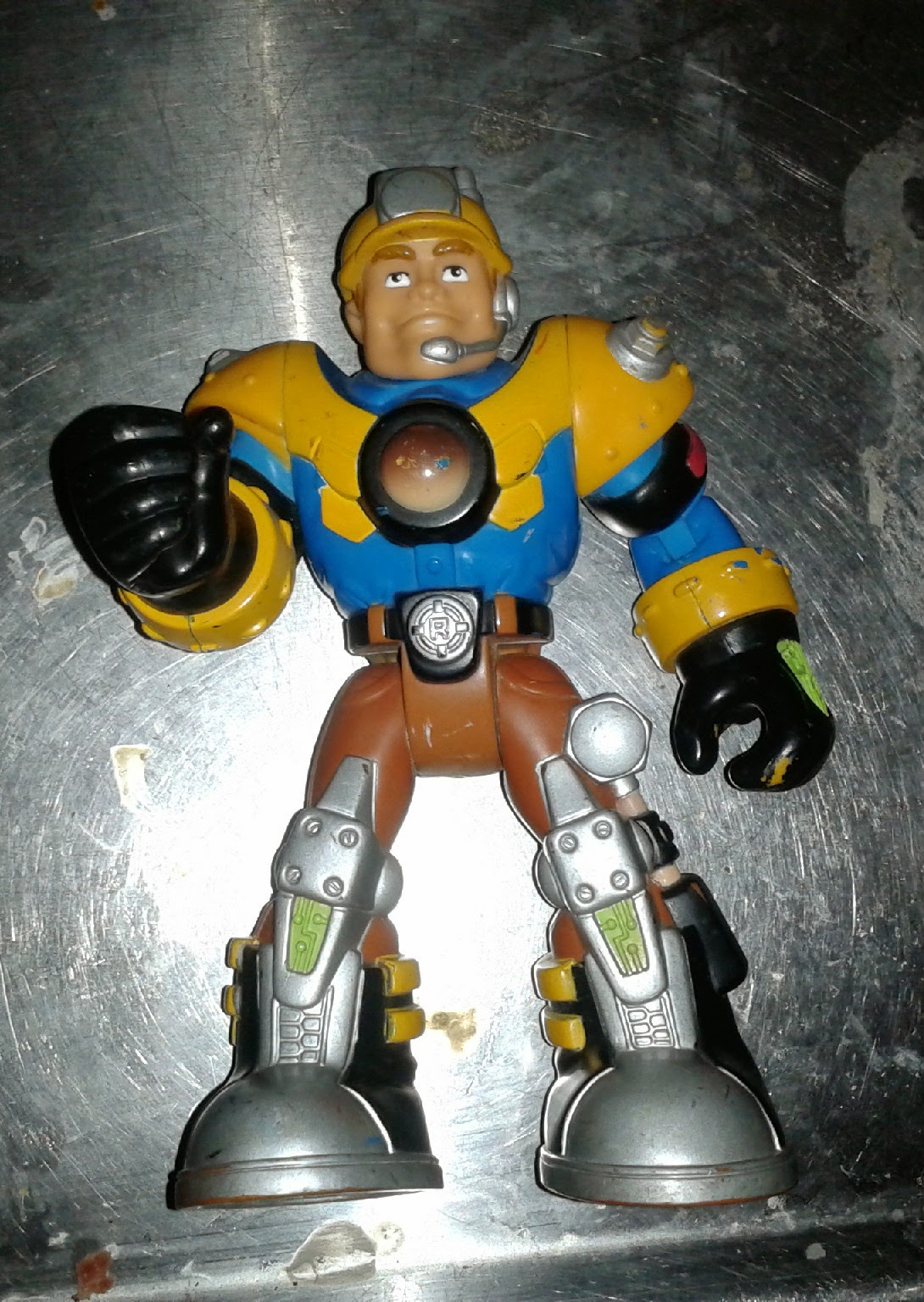 I don't consider myself an emotional person, so feeling an alternate rush of love, guilt and a desire to stay with this kid and never let him go was unexpected. But because I am ultimately a terrible person, I thanked him, kissed him and ran out the door before I busted out crying. (That's a Rescue Hero, an action figure from the 1990s. I'm naming this one Joe.)
So, with Joe in my bag, I head out to my first match of the day against the team I played for last year. No bad blood (pun alert) or anything like that -- it just ended up being the farthest facility from my house. It's a dangerous team, with a bunch of solid 4.5 guys, but the pressure isn't much right now. In the 8.0 league, everyone makes the playoffs. The regular season is pretty much jockeying for position so you don't have to play the really tough teams right away. My partner and I won our match pretty easily, and what could have been a tussle on line two ended when the guy on the opposing team pulled out of the match with a bad hamstring. I was feeling pretty good because at least I'd won one match that day.
But, alas, I couldn't bask for long -- I had to get in the car and drive an hour to get to the 9.0 match. And I knew going in that I would be the worst player in the entire facility, but when I walked in and saw a bunch of former college players warming up, I felt like a fraud. Fortunately, though, one of those former college players was my partner. Our opponents were two solid 4.5s, so I was far and away the weakest link. I told my partner after the warmup, "Look, I'm not comfortable at the net. I can be there, but I'd rather not be there. So if I'm doing badly up there, feel free to pull me off." He was not really concerned by this comment. "Well, we'll start you up there for now and see what happens," he said.
Of course, it took about a minute for me to realize why he wasn't too worried about me -- that's about how long it took for him to hold his serve. I felt like I should have gotten a bowl of popcorn, because all I did was watch this guy rain down these awesome serves, rush in and put the volley wherever he wanted and with whatever pace he needed.
But that was the first game. I couldn't return the guy's serve for the entire first set and his partner was able to put away anything at the net. She wasn't powerful, but very smart and patient. I hate that.
I was most worried about my serve, because at the level I'm used to, it holds up and isn't easily attackable, and the great thing about this match was that it stayed that way. I was still able to use it to set up my partner with easy putaways. My groundstrokes and returns, though, were terrible. They always are in the first set. I am a notorious bad match starter. I need, like, two and a half hours to really start killing groundstrokes. (Most doubles matches are over in 90 minutes.)
As the first set wore on, we were at 4-all, and I was serving. Maybe you've never been the worst player on a court before, but I knew that if I didn't serve well enough to win that game, we would lose the set. But I felt good -- my partner was up there holding it down at the net, and as long as I kept getting weak returns off my serve, we could hold easily and maybe focus on the opposing woman's serve. So it's 15-30 and as I'm walking to the other side to serve, I noticed there was some dark substance on my fingers, and on my grip: 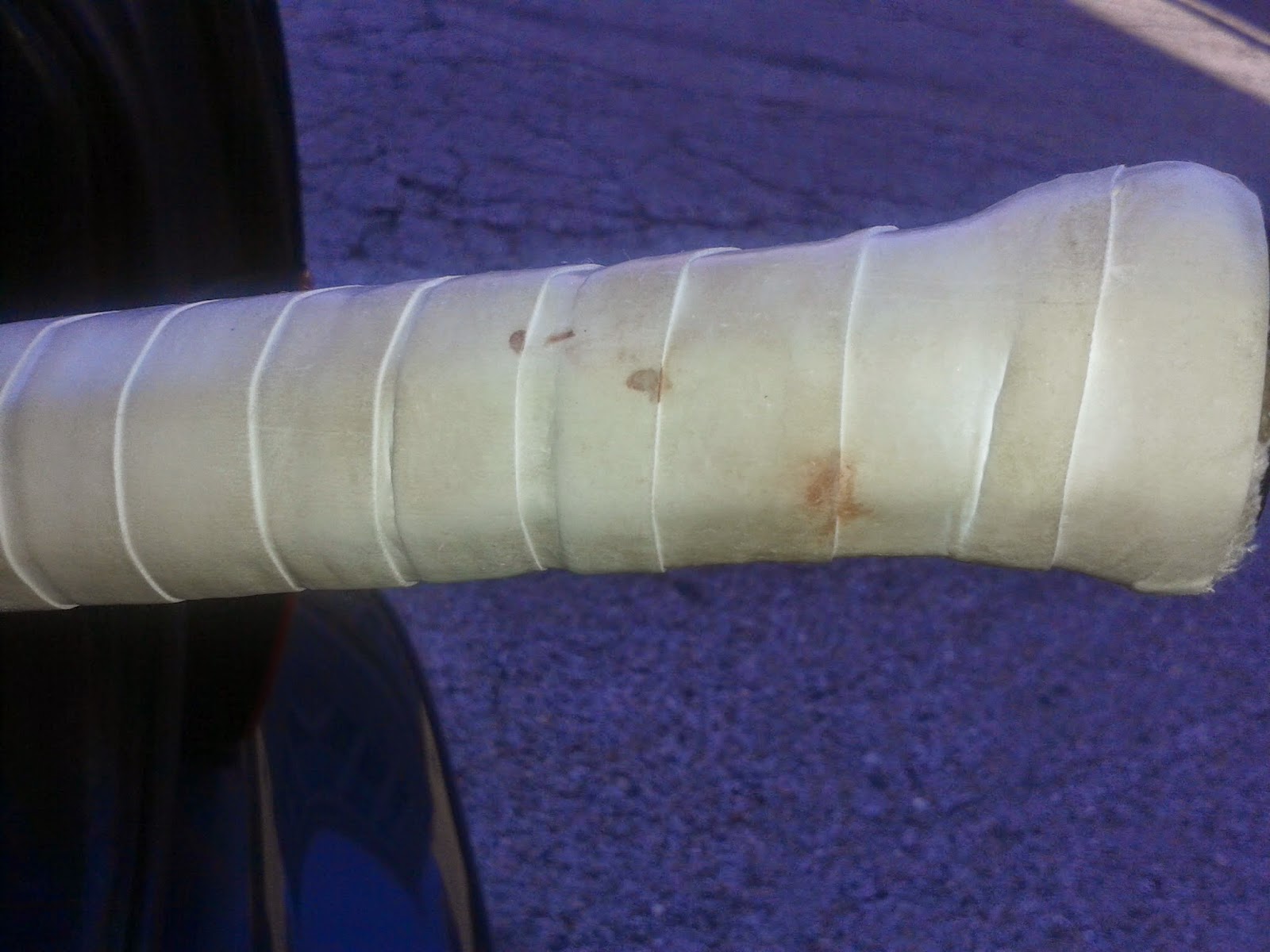 Blood. I still don't know how I cut myself, but two figures were bleeding. I had to stop in the middle of the game to find some Band-Aids in my bag. While I was going through my bag, there was Joe. I saw it as a sign, and after I cleaned myself up, I moved Joe to the top of my bag so I could see him at every changeover.
I rode the Joe momentum all the way ... to dropping that serve game for us to go down 4-5 in the set. The next game, we lost the set. I was about to start moping and kick Joe out of the facility, but my partner turned to me, smiling after we lost that last game. "This is good. I wanted to play three sets tonight." OK, I thought. I like this guy!
We won the second set 6-2 and the third set was a lot like the first -- a grind. By now, the other matches had concluded and everyone from both teams are now watching. Normally, when other people are watching, it makes me focus better, but that day, with a bunch of 4.5 players watching me from the sidelines, it was weird. That might have contributed to me getting into another 15-40 hole on my serve late in the third set. We lose this game, and we're under the gun to win the next. We win, and we'd be at 6-5 with the girl's serve coming up, and I had loosened up enough that I was starting to find my range on those returns. But with her partner moving at net, it was still difficult to break her. Anyway, me at 15-40. I had a mini-revelation here. I realized that my partner is incredible, and it was mostly because he doesn't try to do more than he can in any given position on the court. He's not trying to kill every volley. Sometimes, touch is the best solution. Sometimes blasting at the feet. So by now at 30-40, and serving to the woman, I realized I needed to do what I can and nothing more. I served conservatively to her backhand, and let my partner take care of the reply. At deuce, against the man, I put more on it, as best I could, and also to his backhand. Weak reply, easy putaway. Rinse, repeat. Game, us.
Joe and I had made up by now, so I gave him a rub during the last changeover and lined up to receive serve. I did what I could do and nothing more. I hit two returns that were crosscourt enough to keep the guy from poaching and with enough topspin to make her hit tough volleys and it worked. Needless to say, the 5.0 guy was also able to win his points. Four points later, I had actually been a part of a winning 9.0 effort! Holy #(*#$^&*@, Batman!!
What did I learn? Once again, do what you can and nothing more. It sounds easy, but how many times have you found yourself trying a shot you don't have in a tense situation? No, of course, it isn't going to work. And no, your serve isn't going to miraculously find another 35-40 mph. So you do what you can as best as you can, and nothing more. That doesn't mean you're going to win all the time. It means you're playing smart tennis all the time. This, granted, isn't easy, but tennis isn't easy. Which is why we love it. Right? Right?
Riiiight.


Posted by Naf at 9:01 AM No comments: Links to this post

State of the Fed Cup

The Fed Cup, once again, came and went with nary a murmur on ESPN or most anywhere else. Well, except for this one small detail that the court it was played on was illegal.
New York Times tennis writer Ben Rothenberg tweeted over the weekend that the ITF ruled the courts was just over the measured limit for speed, but that it was too late to do anything about it, so they would just play the FED CUP FINAL ON AN ILLEGAL COURT.
I know, I know. You've sold the tickets. The people are there, the players are there, the show must go on. But I guess the main question is: Why is checking the court the last thing you do? It's only the stage for the event. And what's the backup plan if something were to go wrong -- if the court were actually unsafe? All good questions, but no one cares too much about this small detail. The main takeaway from this weekend, according to most media, is that the home Czech team dominated Germany. I wonder why.
(Just unrelated FYI: Did you know that Petra Kvitova has her best results on fast courts with low bounces? The two majors she has won? Both Wimbledon. Lucie Safarova has never won a Slam, but she's come closest at Wimbledon this year with a semifinal showing. She has never gone past the fourth round at the French Open, which is, shall we say, a slower court.)
And why would the German team not even complain? At last check, they haven't even filed a grievance. Granted, the court surface speed (CSR) should be 50 at the maximum, This court was at 52. If it didn't make a difference, why measure it?
It's enough of a problem that penalties are apparently forthcoming. I am sure the winning team will have learned its lesson.


Posted by Naf at 9:26 AM No comments: Links to this post