Been very busy lately. The last week and change has been full of a daily regimen of laying at a beach, or a pool, or taking in island views. But something weird still ended up in my luggage for vacation: 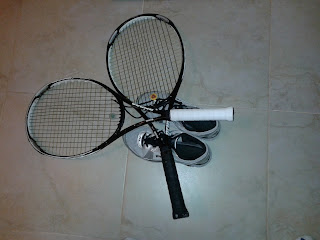 And there have been some pro developments worth noting between my light afternoon hit and the hot tub. I know, rubbing this in is not classy at all. Which reminds me of my massage at noon:

1. I haven't seen the Rafael Nadal/Novak Djokovic China Open final yet, but I have seen the scoreline -- 6-2, 6-2. Yowsuh. Because of his recent struggles, Rafael Nadal is the subject of much speculation. Does he still have it? Can he still compete with the best? Is it finally time to consider a haircut? But his response to these trouncings he's getting from Djokovic will be interesting to see. It's not the first time Nadal has found himself struggling in a rivalry. For a couple years, he came up short to Roger Federer at Wimbledon especially, and he tweaked his game to change that. He might have to do a bit more than tweak in this situation, because Djokovic seems to be getting better and better. He is a fluke French Open loss away from holding all the Grand Slam cards for 2015. Of course, in the middle of a year, that's not an accomplishment that can be fully realized, but here we are. So what can Nadal do to reverse this? Let's ask Djokovic:
"I knew that he's going to make mistakes and he's going to give me shorter balls so I can dominate the rallies, which happened."
That from his post-match press conference, according to tennis writer Carole Bouchard. So can Nadal flatten out his shots? Is he going to man up that serve at all?

Oh, sorry. I was just asking the questions. I don't have the answer.
2. Serena Williams decided to shut it down for the year and everybody lost their mind. Me? It's like, "meh." Frankly, this nonsense about her being engaged to Drake is a bit more unsettling. I mean, he was on Degrassi, guys. Does this bother anyone else but me?!
3. However, whatever happened to all this talk of a shorter calendar for ATP and WTA tournaments? Is pushing back the Australian Open by a couple weeks supposed to make everything better? I just realized that even though it's October and there are still seven tournaments left, not including Shanghai, which starts this week. With Serena out of the WTA year-ending event, and other good players (Victoria Azarenka, Maria Sharapova, Garbine Mugaruza) pulling up lame, here's another question: Who wants to see a year-ending tournament without the players who made the regular season interesting?
I think I got this answer: No one, that's who.

Posted by Naf at 8:17 AM No comments: Links to this post