French Open: Saving up my thoughts for a rainy day

The rain has played some serious havoc on the schedule for the tournament. Andy Murray, for example, has advanced to the quarterfinals of the tournament while Novak Djokovic has yet to begin his fourth-round match. It's not as backed-up in the women's draw, but even if it were, best-of-three matches are a bit easier to knock out. The weather forecast in Paris is calling for a 90 percent chance of rain on Tuesday, according to The Weather Channel, and the rest of the week isn't looking great either.
This has led to some inspired conversation about what to do in order to insure a scheduled Sunday ending to the tournament, including switching some of the men's matches to best-of-three sets. Other suggestions are: a sudden death Rock/Paper/Scissors lightning round to determine the remaining quarterfinalists, a vegan hot-dog eating contest, allowing the player with the best Instagram account to advance through the draw and limiting each tennis match to one hour.
There is another idea floating around out there, and because it makes perfect sense, it isn't very popular: Finish the tournament late! It's a Grand Slam, for heaven's sakes. You don't rush majors. Or, sure, let's rush a major and whoever wins it can get that beloved asterisk next to his name. And then you scroll down to see what it means and it'll say:
* advanced to quarterfinals by finishing the "Miss Mary Mack" clapping game the fastest without making errors
If I recall correctly, the years that the U.S. Open has finished on a Monday did not cause some type of seismic shift in the tennis world. In fact, the break from tradition can bring a fresh breath of air and also this other thing called a quality match. I would much rather see players who have been allowed an opportunity to rest after their previous match take to the court than someone who is tired and is making a ton of errors because he can't move. If I were a fan who paid for that ticket, I'd be pissed. If it takes until Monday to get the cream rising to the top and playing great tennis, that's OK to me. Best of three? What about the women? Do they get pro sets? Or a spirited game of 'Odds and Evens'?

Posted by Naf at 12:34 PM No comments: Links to this post

When considering the controversy surrounding Alize Cornet, there's really just one question: Is $42,000 really all it takes to take leave of your reputation?
That's the difference in the prize money had Cornet lost in her second-round battle on Thursday against Tatjana Maria. Most tennis fans know that wherever Cornet is, drama cannot be far behind. This time, when Cornet began cramping late in the match, she colored outside the lines a bit to get treatment for her legs.
Now, for some reason, you can't get treatment during a match for cramping, which is something I don't really get, but OK. Fine. The rule is no treatment if you're cramping. So Cornet is accused of getting treatment when she shouldn't have been and taking significant time out of the match.
Anyone who's been reading this blog knows how I feel about this kind of behavior. It's pretty lame, although some would argue that if you can get away with it, why not? And she did get away with it and most of that is on her opponent. Sucks, but it's true.
I gotta say that $42,000 is a lot of money for me, but not to Alize Cornet. For a pro tennis player who is actually pretty good, that doesn't seem enough money to sacrifice your reputation. Only Alize Cornet would feel good (very good -- I mean, for heaven's sake. You're not Guga. You don't just get to make clay angels after any match) about winning a match in that way. That's pretty shameless, and I don't root against people very often, but I sure was today, when Maria beat her in doubles. Haven't seen it yet, but here's hoping there was a weak lob floating around the net with Cornet on the other side.

In other news, Rafa is out of the French Open with an injured left wrist. JUST PLAY WITH THE RIGHT HAND, RAFA!


Seriously, I'm bummed. That's all I got on that right now. (sad emoji row here)
Posted by Naf at 1:08 AM 1 comment: Links to this post

There seems no better time to look back at the first round of the French Open then now, as I watch Andy Murray fight off some other guy no one ever heard of. He's down 5-3 in the second set to ... wait, lemme Google his first name ... oh, here we are -- Mathias Bourgue. So this should be fun.
But besides what might be about to happen to Murray, there have been some surprising results so far. Let's discuss!

1. It really is not right that Victoria Azarenka cannot avoid injury. She had to quit her first round match yesterday against Karin Knapp in the first round with another knee issue. Now, Azarenka has only three Slams, but consider the major tournaments she hasn't been able to play. She's a legit contender to Serena Williams and the other top players, and it must be frustrating as hell for her. So down goes Azarenka.
2. Down goes world No. 3 Angelique Kerber. Kerber is new to the top echelon, so perhaps we should lower the expectations. Having said that, guys, she has no weapons! Like any lefty, she has a tricky serve, but it's not that tricky. She can run anything down, but you have to be able to finish the point some time. I just don't know about that one.
3. Discuss amongst yourselves: The concept of 32 seeded players is completely and utterly lost on the women's draw due to its current lack of depth.
4. Right now, Andy Murray is down 2 sets to 1 against this guy. Bourgue is walking around the court with his chest puffed out, clearly in his IDGAF stance. Murray almost lost in the first round to Radek Stepanek, who I can barely believe is even still playing tennis. Is it the coaching maelstrom? Not sure yet. Even though I've never heard of this Bourgue guy, he obviously is not a pushover. Seems Murray just got a crappy draw to me. For now.

Finally, there is this, which is hilarious to me: http://kdwn.com/2016/05/24/the-latest-reports-of-schiavones-retirement-premature/
Apparently, tournament officials have decided that if you're over the age of 30 and you lose a match there, you should hang it up. Hear that, Serena and Venus Williams and Stan Wawrinka? Probably not, because they're old.
Posted by Naf at 10:39 AM No comments: Links to this post

French Open Preview, or How I Stopped Worrying and Learned to Love Tossup Tennis

There are 128 players in the French Open draw in each singles division this year. But let's talk about the people who aren't playing for a second, because that list is really interesting.
Because we've got:


Now with that out of the way, let's deliberate on the players who are left and what obstacles they face. Let's start with the men's draw: 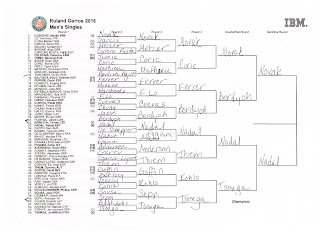 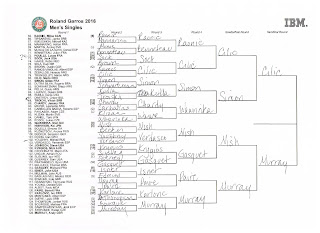 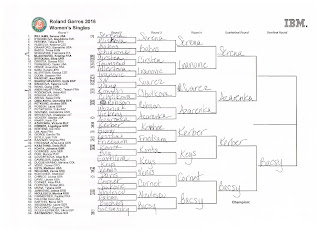 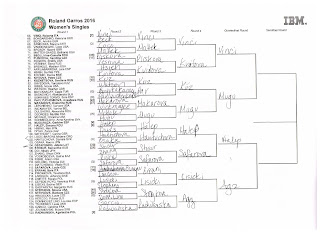 Posted by Naf at 2:07 AM No comments: Links to this post

The breakup heard 'round the courts

The clay-encrusted buildup to the French Open continued last week with Simona Halep winning the Madrid tournament. She was really happy about this, as you can see here. With that low number in front of her name, it appears she was quite lucky to advance. Other favorites, such as Victoria Azarenka and Petra Kvitova, sputtered out of the tournament pretty quickly. It was the first big tournament win for Halep in a while, so ... wait, what? She lost already this week in Rome, in the second round?
Speaking of stalled momentum, Rafael Nadal, who's been looking more like himself on clay this season, lost in the semis of Madrid to Andy Murray. Makes you wonder if Nadal's ready for the big boys yet, even on the clay. Last week, I thought he was. This week ...
Murray, though, had a pretty good week (he lost in the final to Novak Djokovic), but most of the Murray-centered chatter was about his coaching situation. He announced that he was breaking up with Amelie Mauresmo because of time constraints that limited her travel.
Whatever the reason for the end of this coaching relationship, let's just consider that even women don't hire women coaches. And the second this partnership was announced, critics said things like, "Hmm, that was a weird choice," they meant, "Dude. You're a dude. Hire a dude." Even I must concede that I thought the pairing was odd, but because of Mauresmo's issues as a pro.
Now this partnership didn't yield Murray a bunch of major titles, but under Mauresmo's watch, Murray settled into a steadiness on court. He still had his infantile bursts, but he was at his most consistent so far with Mauresmo, winning the matches he should have won, and even claiming big-deal victories (Rafa on clay, for one). I still think it's ironic as hell that a player who was known for a long time for losing her mind in high-pressure situations became a coach who could instill peace into another player.
But the best thing about this partnership is that it broke with status quo and in a way, allowed Murray to say something about women players that old-school tennis tournament organizers are obviously unwilling to say. Murray hired a woman to do a traditional man's job because he looked at what she could offer as a coach.
That's a big deal in a sport that clearly still struggles with gender equality.
Posted by Naf at 9:19 AM No comments: Links to this post

It's not been the friendliest of stretches for Rafael Nadal, but he has somehow found his groove again. Naturally, it's on clay. Nadal's about to go into the Madrid Masters tournament this week with three straight tournament wins, including this last one in Barcelona. I finally had a chance to check it out and wow, is Kei Nishikori looking good right now.
But so is Nadal. He's hitting the ball with authority and not hanging back in the first row of stadium seats to return serve. One other thing: Nadal is still a great defender, but it looks like he's being more judicious about the balls he tries to run down. This isn't a bad thing. It's probably going to be better on his body, but the other advantage is saving your strength to keep yourself in points you can actually win.
The draw is out for Madrid and right now, Roger Federer is at home thinking, "Of course. Of course, I'm the one coming back from injury and I'm the one who probably will get Nadal in the quarters while he's playing better than he has in a year. Of course." Now, Nadal has been showing some real improvement in his last three tournaments, sure, but I'd like to see what happens if he gets a chance to play Novak Djokovic here. (He's the top seed and in the other half of the draw.)

Other stuff worth mentioning:
Posted by Naf at 11:06 AM No comments: Links to this post