I am relieved to be past this current Slam without trauma. I hesitate to point out how crazy last year's U.S. Open was (do y'all remember that a court umpire gave Nick Kyrgios a pep talk during a changeover last year?), because this one was the complete opposite. It was unpredictable but only on court, and both singles finals were worth the (exorbitant) price of admission.
Let's start with the women's final, which featured the two finalists from the Canadian Open -- Serena Williams and Bianca Andreescu. Andreescu won that one because Serena had to quit with a back injury. But it seemed that Serena got stronger as the tournament went on, and she started pretty strong. Her footwork seemed to be back, her serve cracking. Everything was working. Meanwhile, Andreescu was on the other side of the draw, in trouble basically the entire time. I still am not sure how she beat Belinda Bencic, but even before that, she got out of two three-setters, a Wozniacki and a Flipkens (and I don't know where I was for that one, but given the variety of both players, it must have been a thing to behold). So I didn't know what to expect, but it wasn't the match we got. Andreescu was dominant, but Serena wasn't exactly offering up a stiff challenge, not until the end.
So what's the takeaway? Serena has lost in four Slam finals since her return and I believe that with the exception of Naomi Osaka, is the only person in that span of time to have made it to multiple Slam finals. No one at the Slams has been more consistent in the last couple of years than Serena. It's almost undeniable that she is feeling some pressure to deliver Slam title No. 24. I can't think of another thing that would explain her performance in that final. All of the wheels came off.
If she didn't win another major, it wouldn't make her less of a dominant force in women's tennis. In paper and in fact, she doesn't need this, but it means something to her. Winning a Slam after having taken time off from having a baby might be more important to her because it would signal a full return to pre-baby form, and maybe her most significant physical endeavor. It's a lot of pressure and I wish she didn't feel it, but she does. You can't keep putting yourself in a position to win and never win. So she'll get it. Like, at some point.
Now for Andreescu, who -- I mean, it is wild to be 19 years old and have a run composed of matches like the ones she had and to bear down to win all of them, including unnerving Serena Williams from the first game on Saturday. Her game is just fun to watch. Obviously, she can slug, but she is a rare young person who uses the whole court and is comfortable changing the pace of a rally. I think she and Osaka are destined to run the tables the next few years.
The men's final also featured the same finalists from the Canadian Open -- Rafa Nadal and Daniil Medvedev. Have you ever watched a match thinking that you'd like to see more tennis due to the high quality of play and then watched in horror as the thing you wanted actually comes to pass? Yeah, that was me. First of all, who expected Nadal to be the most fit of the Big Three by the end of the summer? Any summer. Second of all, watching Medvedev play tennis is like watching a stick figure made of plastic, though, and not sticks. So I don't know how he did it, but he did it and he did it provoking almost-certainly a drunk New York crowd. Medvedev didn't start this tournament well, because mistreating ballkids and sneaking in a middle finger at the crowd is not a good look. But he finished with class and honestly showed more growth in two weeks than most players do over a whole career. (Course I'm not thinking of Krygios. Mind your tongue.) Also, if Medvedev is going to play so many tournaments in a row, he might want to eat something.
Back to Nadal. Now that he is breathing down the neck of Roger Federer's Slam record, which seemed safe just two years ago to me, questions are being asked. Novak Djokovic is still third in that race, but is the youngest and in theory, most likely to add to his total and also make a push for that record. So what does it mean for the GOAT debate? For decades the Slam titles have been the determining factor for greatness. But this time next year, there is a really good chance that race could look differently. What if they all end up with, say, 22 majors? Who's the best? Let's be real. There's only one good answer and it's whoever your favorite is, and that is Rafael Nadal in this TWA house.  I'm willing to entertain discussion because I'm nothing if not polite, but yeah.
It's Nadal.

Posted by Naf at 9:01 AM No comments: Links to this post

OK, let's start with what's top-of-mind: Boy, that Goffin upset was a bad call, was it not! Yikes.

So yes, of course, I watched the marquee matchup of the tournament so far: Coco Gauff v. Naomi Osaka. I actually did expect it to be close. But clearly Osaka came prepared. It's not as if Gauff had been playing hacks in previous rounds, but I really noticed her lack of patience last night. Which makes sense -- she's young, and has been well-served by her athleticism so far. But she would win points off Osaka and then fail to reproduce a similar point.
But who cares about the X's and O's, right? After the match, Osaka did something that is essentially unheard of -- she asked Gauff to do the on-court interview with her -- she shared the stage. And I'm not gonna lie -- it made me cry. It was endearing. These two grew up together and it was a moment to lend a nod to the sacrifices Gauff's parents made and the journey she's on. I mean, I get it.
But.
I want to say that I think Gauff has the potential to be amazing. She's not like the Williams sisters in that she has had proper coaching her whole life, so she won't have to unlearn some of the mechanical issues they did when turning pro. She has a great foundation. This is really why I'd like people to leave her alone. Like, everyone. The fans who want her picture. The media who want a minute with her. And Naomi Osaka, who thought it'd be a good idea to share the spotlight with another up-and-comer, perhaps considering that she was another woman of color on the biggest stage in tennis. I get it. I honestly do. She's a great story. They both are, together.
But.
So Coco Gauff is 15 years old. And no one wants to say this right now because we're in a touchy-feely moment, but in sports, we eat our athletes and idols alive. The black ones especially, and especially in tennis. If you need further evidence of this, just look a bit further down the draw to Taylor Townsend, who, along with Donald Young, were touted as the future of American tennis. Then she didn't live up to everyone's expectations and when a young athlete does this, the encouragement decreases in volume and in enthusiasm. Now she has materialized again with a great run here, and it has been in spite of the lack of support. Let's not even get into what happened to Jennifer Capriati. Does anyone else remember the crap that Venus Williams had to take -- from her own countrypeople, too -- about how cocky she was? Venus was 17 and everyone had something to say when she expressed her belief that she could beat anyone. Most of it wasn't good. Because certain attitudes aren't acceptable from certain people. You know.
Unfortunately, I don't doubt this also will happen soon enough to Gauff, but I would like for people to begin treating her like the 15-year-old that she is. I would like for people, especially grown-ass adults, to recognize that pulling on a kid's shoulder bag and begging her for a selfie is draining. I'd like the post-match ESPN interviews to last for three minutes and that's it. And I would like for other players to quit dragging her into the spotlight in Arthur Ashe stadium right after she's taken a worse loss than she probably expected she would. I think I understand what Osaka was doing and it was a beautiful gesture that I would have had no problem with, had the recipient been maybe 19 or 20. Coco Gauff is 15 years old and we are about to wear her out before she even gets going.
So, with that public service announcement out of the way, wow, what a tournament! Basically, as usual, my draw began falling to pieces. For example, picking Aryna Sabalenka to go deep in a tournament bit me in the ass once again. I thought for sure after watching her beat Victoria Azarenka that she'd run the tables, because that was a tough match. Nope. One round later, she's out.
Angelique Kerber. Ashleigh Barty. Simona Halep. Kiki Bertens. Sloane Stephens. Petra Kvitova. All gone before week 2. And of course, this is great for tennis.
But I am ready for tonight (Sun. Sept. 1). Novak Djokovic, he of the sore shoulder and everlasting grudge against randos in the stands, is playing Stan Wawrinka, and when the draw came out, I picked Djokovic for this matchup. But with Djokovic getting all sensitive during practice and cutting short his match prep last round, I don't know. Wawrinka is looking good right now. I think we're looking at four sets ... to Stan?
And then there's Elina Svitolina v. Madison Keys. I had the opportunity to watch Svitolina in person as she beat Venus Williams on Wednesday at the Open. (Oh heck yes, I went back to the U.S. Open and have a post upcoming about that experience!) I also saw Keys that same day and both of them looked really strong and consistent. I would give a slight edge to Keys because of her serve. 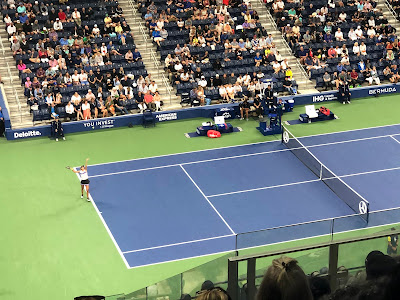 Yeah, not a great shot, but had to find some type of way to brag about having been there in person. But let me go get some popcorn and geek out on tennis all night.

Posted by Naf at 7:26 PM No comments: Links to this post