We Got Some Salty Tennis Players in Miami

I am regularly surprised by things that happen in pro tennis. I couldn't have told you that Naomi Osaka would win two Slams in a row by the time she was 21. Or that Serena Williams would back out of both Indian Wells and Miami. (Well. That's not as surprising.)
But if you were going to ask me if there was one top player I could think of who would say something mean to her opponent at the handshake, it would not be Angelique Kerber. And yet, here we are.
In case you missed it (and some people are apparently hoping you missed it), Kerber, who lost last week's IW final to Bianca Andreescu, played in the second round in Miami against ... Andreescu. During the match, Andreescu called twice for a medical time out with an arm problem. At the end of each time-out, she went back to the court. It was a great match. Full disclosure: It was nearly 1 a.m. when it ended in my corner of the world and I was drifting in and out of sleep, and when the final ball was struck, I snapped awake to see the two players meeting at the net. Kerber said something and she looked irritated, but it didn't register and I went to sleep because I was tired. It was the next day before I saw the clip while fully awake:

OK!
First, Kerber is not Miss Shade Academy, so this is wild to see from her. Second, there are players who are very dramatic where I wouldn't be surprised to hear them getting called out

.
Andreescu was not playing that card. So, what on earth was Kerber talking about?
Third is this apparent effort by Kerber and the WTA to pretend that the whole thing ... never happened? The WTA scraped it off their website and the next day, Kerber makes this nice Twitter post in tribute of the teenager.


Here is a crazy idea. Maybe just (wo)man up and say sorry if you did something wrong. Because it's not a good look when you are a tour veteran and you pitch a fit after a talented teenager beats you for the second time in some days. Calling someone a drama queen in a huff after you lose to this person is a pretty drama-queen thing to do. Mainly, I just want to know what she meant. And another thing: When did the WTA get into public relations? You know what I can find at this moment on the WTA website? Full accounting of Serena Williams going postal at the U.S. Open. But we're protecting Kerber?

Speaking of drama queens, on to the next tennis controversy in Miami. Apparently, Nick Kyrgios won a crucial point in his match Monday by serving underhand. And well, social media thought that was (wait for it ...) underhanded. Look, serving underhand is annoying and tricky, but it is an acceptable tennis play. I play with some people who do that. Yes, they're 70-80 years old. It is legit, though. It's exactly like a drop shot. Tennis, as I've said, is 99.9948278 percent mental. Part of that means being ready for anything. I mean, as a player, no one likes when someone does this. But is that what we're doing now? We're playing nice? I hope that's not true because I'm working on my underhand serve after I hit publish.
Posted by Naf at 8:44 AM No comments: Links to this post

Strangely, I have not dedicated too many key strokes to Bianca Andreescu before, but I will rectify that now. And I'll just start with WOW.
So I watched that Indian Wells final and it was one of the most entertaining finals I've seen recently. This final, Andreescu v. Angelique Kerber, was what happens when two players showcase their strengths ... and when, mercifully, one of those strengths is not a serve. They have good serves, yes, but no one was acing their way out of trouble. Lucky for us, they had to slug their way through the trouble.
I've written before about Kerber's unconventional game, and I still have trouble understanding how she does this all the time -- advance to big-time finals, and usually win them. For a minute, it seemed as if that was going to happen again.
OK, so Andreescu. I am impressed. It's not just that she's 18 and had a great run through this tournament. Think about the players you know who have the variety that Andreescu displayed the other day. Seriously. Off the top of my head, I have Roberta Vinci, Conchita Martinez, Fabrice Santoro. Santoro's too far maybe. But anyway, what do those players have in common? At the height of their careers, when they were masterfully displaying that variety, they were in their late-20s and early 30s. This chick is 18. Unfortunately, I had the volume on during the match, so I could hear the commentators saying that she was going to the drop shot too much. Never stop, Bianca! Because guess what? It worked and if you are fortunate enough to have powerful groundstrokes that can keep someone pinned to the baseline, then yes, the drop shot is an intelligent play. Just because a player starts running in doesn't make it less effective. Kerber's returns on that shot (except for that one lucky slice up the line on a dead run) did not leave Kerber in a winning position. Plus, no one drop shots anymore, and it's annoying. Andreescu is 18 and is already learning how to use the entire court.
Yes, she has room for improvement. She fairly limped over the finish line on Sunday, so the fitness maybe could use some work. 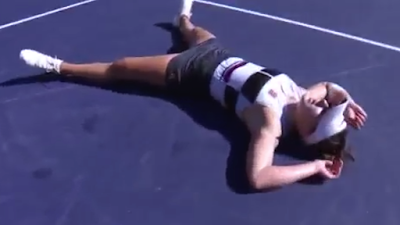 But as far as I can tell, when it comes to the brainy part of tennis, she's already ahead of any of the young women I've seen coming up so far.
Not much to say about Roger Federer going down to Dominic Thiem in the men's final. It was entertaining, and Thiem is about to mess around and bring back the one-handed backhand. His backhand is definitely better than Fed's right? That's what I saw.
Posted by Naf at 8:20 AM No comments: Links to this post

Shame to see that Sloane Stephens didn't play Indian Wells this year. I was wondering about her form, especially considering her rough start to the year. Maybe she took some time ... what? Did you say she did play this tournament and won just three games against Stephanie Vogele, a player who has made nary a peep on the tour for some time? Ah, OK. I want to say something snarky, but Stephens is streaky and could just as easily pull off the French Open before another severe swing in the opposite direction. 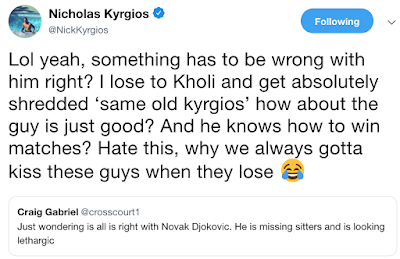 Kholi! I love it. It's mine now.
Oh, and so, Nick. There's not a nice way to say this, but there's a difference between an inconsistent player producing inconsistent results versus a consistent No. 1 player losing to an unseeded opponent. Kyrgios has a ways to go before he can call out comments like these.

One day, I am going to do a longer post about the Venus Williams of the early aughts and the player she is today. She's having a good run at IW -- that win over Petra Kvitova was peak vintage Venus, only in the grit she showed. But to suggest that we're seeing a vintage Venus in regards to her game? No. She was never this good in her "heyday." Her court awareness, her willingness to take the net IN SINGLES and the way she uses her backhand is all present-day. She has been working on her game. It didn't leave her in 2008, only to return in 2017. She is better now than she ever was, regardless of her age. Full stinkin' stop.

I honestly don't know how Elina Svitolina does it. I probably would if I took a bit more time to watch her play, but, man. Her game is boring. I don't know. Is it just me?

Here is my current salvo in the war I am waging against on-court coaching for women only: 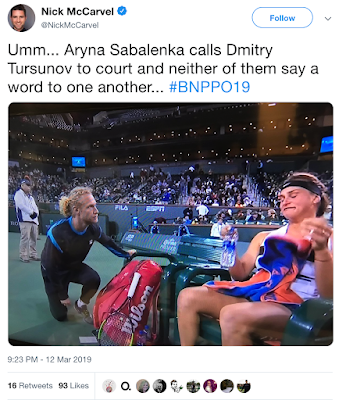 That's it. That's the whole salvo. 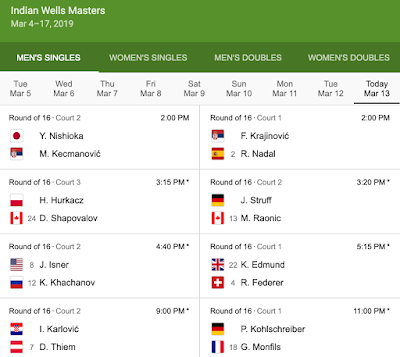 This is quite the slate for today and I definitely feel like I have the sniffles all of a sudden.