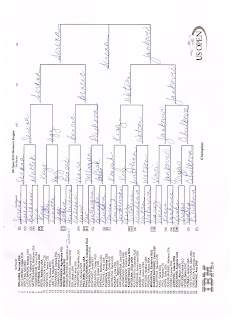 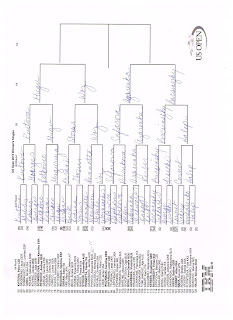 Really, the only thing left here to discuss is Serena and predicting if she can pull off a true-life calendar Slam. Obviously, no one can say with any certainty. Who knows? Maybe at this very moment, she and Drake have decided to elope and get married. (Although it is probably not a good idea to marry anyone who was on "Degrassi." Hello, drama!) Or she could get injured, or she could fall at the first hurdle this year, some woman named Vitala Diatchenko. Or even Bethanie Mattek-Sands. Or she could have another end-of-year meltdown (which does always seem to happen at the U.S. Open for her ...)
So, let's take a page out Sarah Koenig's book, and consider the "most logical" conclusion. At the French Open, Serena was far from her best and won. One of her "main rivals," Maria Sharapova, is out of the tournament. Another one, Victoria Azarenka, is still ranked 20. There really isn't anyone who has posed a stiff-enough and consistent challenge to Serena. She's seen their best, and she knows she can beat it. She's had pressure all year, and she's dealt with it. So the real question is how she deals with this pressure, because no one outside of Serena can decide this. She's answered the question already. I would just say that as long as she's not called for a phantom foot fault, she should be good to go.

But on the other side of the draw, I have drawn myself into a corner. I still can't decide who advances to the semis on that side. Obviously, I don't think it matters a ton. But any thoughts?
Posted by Naf at 9:32 AM No comments: Links to this post

How do I think the U.S. Open's men's draw will play out this year? Well, take a look: 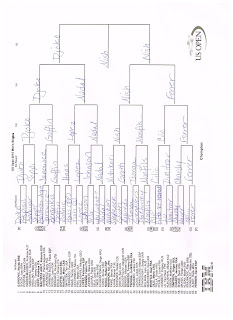 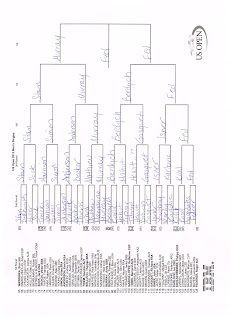 A lot of this speaks for itself, but a few things to note:
1. Kei Nishikori over Novak Djokovic in the semis? Yeah. I think Nishikori is special. Last year, he made it to the final, and surprisingly did not bring home the title. That stumble might be enough to trigger disbelief for many others, but I think he'll be back. He's got the game to take down Federer in the final. He got Djokovic last year, right? Also, I hope Nishikori v. Monfils is a night match. Pleasepleaseplease
2. COME ON TOMMY HAAS
3. COME ON MARDY FISH
4. Hewitt v. Tomic. Now that should be fun. Sometimes Hewitt got on my nerves when he was a kid, but now it's really fun to watch him still scrapping away.
5. No, Nadal is in no condition to beat the top few players right now, but he is also not in the place where he's losing to Borna Coria.
Posted by Naf at 9:19 AM No comments: Links to this post

Pre-U.S. Open rant: Telling women what to do

My big takeway from the Serena Williams/Simona Halep Cincinnati final wasn't necessarily Williams' dominance and her continued ability to pull victory from inconsistent play. We already knew about that.
More than anything, the match made me realize just how ridiculous on-court coaching is -- on at least three levels. Let's review them now:

Level One
So Darren Cahill is the Adidas player development couch, and he was available to Halep during changeovers for on-court coaching. Cahill is also a commentator for ESPN at times, along with Brad Gilbert and Mary Jo Fernandez. Gilbert says something about how surprised he is that Serena's opponents never change where they stand to receive, which is a valid point. But he and Fernandez discuss this for about a minute. Set ends (to Serena), at which time Halep calls Cahill down for a chat. Among the advice he gives her? Vary your return position during the Williams serve.
OK, so that's not conspiracy level or anything like that. And it could be a coincidence -- that's a good piece of advice I've heard before. But it illustrates one problem with this on-court coaching. In theory, Cahill can use his years of expertise, and tap Gilbert, and maybe throw in a McEnroe. He could even have complete access to instant stats online OF THE VERY MATCH THEY'RE PLAYING. One of the things that's special about tennis is that it's like a mental puzzle that the player has to figure out. Obviously, on-court coaching takes away from this and even allows a coach to walk a player through the match using all kinds of tools. You can't call it cheating, because now it's part of the rules, but it does beg another level of questions such as

Level Two
'Why just women?' And why not the majors? Here's why. It's not really a part of tennis, and shouldn't be a part of tennis. And the fact that it's only done for women is insulting. It says, "Oh, lord, look at these poor girls out there. How can anyone expect these girls to figure any of this out by themselves?" (insert sad-face emoji)
If the answer is that it's to draw fans to tennis, that's nonsense. In sports, watching someone being coached is usually not the memorable part. Unless you're Alison Riske and your boyfriend/coach tells you to STFU. (Quick aside: That's why that dynamic almost never works.) Otherwise, not entertaining at all. So the only reason left to limit this to women players is the idea that they need it the most. Nice. Nice.

Level Three
On-court coaching illegal in your average league play. Some kid's mother yelled at me one day when I was playing against her daughter because I was using my phone during a changeover. I was calling my job to tell them I was running late (because tennis, you guys), but she said, and I quote, based on my memory from probably six to eight years ago, "You could be calling your coach."
!??
That was laughable on some other sublevels, but the fact is that I can't get coached, or phone a friend, or get any other lifelines outside of my own head during a match in my league tennis. And rec players need help more than anyone else! Some real talk: The only things rec players know for sure is how to blow $200 on a racquet because it's Roger Federer's stick.
Look, if Maria Sharapova, a professional who has been playing her whole life, has more need of a coach on court than us hacks, we got a problem. Oh, what? The stakes are higher for her? True. The stakes are also higher for professional male players, but they don't get to flag their coaches. Heck, Boris Becker makes a gesture in Novak Djokovic's general direction, and everyone loses their damn mind. I bust out my cell phone, and my opponent's mother is ready to brain me with the backup racquet. Halep calls Cahill over, and everyone's like, "Good call. Solid advice."
Yah. Totally makes sense.