So, I'm watching a replay of Andy Roddick lose the best match he's ever played at Wimbledon this year and it made me realize that 2009 was indeed full of ups and downs. An example: I was talking tennis with a friend at work who is a Roger Federer fan and he was trash-talking against Rafa Nadal. "C'mon, Federer owns Nadal now!" he says. "Really?" I said. "Really, Garrett? Remember the Australian Open? Remember Federer crying like a little (you know) after getting his (you know) handed to him by Nadal? Really? Really?" (I get a little worked up talking about tennis sometimes.) As it turned out, he had forgotten all about that. Understandable, though, isn't it? Federer went from that to winning the French, Wimbledon and almost the U.S. Open, placing him in every final this year. Not bad. At the very least, the man managed to silence the "Who's Next" talk -- Murray or Djokovic. For now.
It was a remarkable and history-making year for Federer (and also had a couple kids!). But that was then. What about 2010? Let's take a gander, yearbook-style:

Most likely to succeed (or win his/her first major):
Male: Andy Murray. I know a lot of people don't buy Andy Murray as a Slam winner, but his game gets stronger every year, and his fitness also improves by leaps and bounds. The question is: Can he handle the pressure, the fact that myself and many others expect him to do something big? I think so. He's no ...
Female: Dinara Safina. I would almost go with Caroline Wozniacki, but she doesn't have the firepower Safina has. Now, if you put Wozniacki's brain in Safina's body, you might have something. Seriously, Safina's melted down too many times at big moments to continue in that way. At some point -- and I think she's reached it -- you get tired of coming up short because you don't have the nerve to take a win. Barring serious injury issues, I wouldn't be surprised to see her come up big in Australia.

Most likely to skip a grade (or make a big ranking move):
Male: John Isner. I can't believe I'm picking an American and one who has a big cheat because he's like 10 feet tall. But I was really impressed with Isner at the U.S. Open, and he's showed that he's more than a big serve. He's got the game to give the top 5 players fits.
Female: Justine Henin. I hate to say it this way, but if Kim Clijsters can come back and win a major, then Henin can win the French after eating Bon-Bons for a couple years. If we're talking about someone who hasn't been to the top of the mountain, I say Sabine Lisicki. She's got power, she's got nerve, she's got wins over tour veterans like Venus Williams, Patty Schnyder and Svetlana Kuznetsova and I see top 10 coming for her.

Most likely to be at the head of the class at this time next year:
Male: Rafa Nadal. I know. Injury, injury, injury. But I believe in Rafa. He has been well able to adjust over the years to get to No. 1 in the world. I think he next has to change his game so it's easier on his body, although he is a grinder. He's got to find a way to make it to the end of the season, but he's young. Time's still on his side.
Female: Serena Williams. Justine Henin. Dinara Safina. Come on. It's women's tennis. As unstable as a mental patient.

Most likely to graduate (or to stay retired):
Male: Marat Safin. I went to my first U.S. Open in 2000. If you're an American tennis fan, going to the Open is like being cut loose in a candy store. You've got your show courts, of course, but then there's the Grandstand, where I saw James Blake for the first time playing doubles well into the evening. Arantxa Sanchez-Vicario was also playing doubles on an outer court. Martina Navratilova and Venus Williams were just walking around the grounds. Pretty awesome, sure, but my eye was on one man. We got into the Safin/Sebastien Grosjean match, I think, in time to watch Safin pull out a tough one. My brother and I were close to the front rows through the match and when it was over, I shot up to get close enough for a photo of the man who I thought was going to be my husband one day. (There's still time, Marat. Call me. I already have a husband, but I'll figure something out. Pool boy. Gardener. Whatever.) One problem: I was so nervous to be close to him that I couldn't move. But there he was, signing autographs close enough so I could see his sun-kissed forehead and perfect hair. Still couldn't move. So I did what big sisters do -- I ordered my brother to take that picture for me: 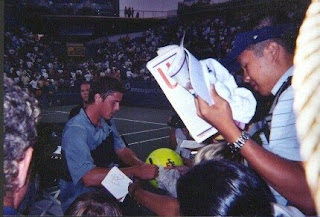 It's the closest I ever got to my first tennis crush. He won the Open that year. And everyone, including Pete Sampras thought there was more coming.
There was, but not exactly what we thought. Safin had the ability to be the equivalent of Federer for a window of time, and for some reason, he didn't. He showed flashes of greatness, but the year he lost to Thomas Johansson, in 2002, at the Aussie, was without a doubt the biggest head-scratcher of the decade. When people retire, having done the best with what they had, such as Andre Agassi, it's a celebration. When Safin retired last month, having barely scratched the surface of his potential, it's like, "That's it?!? I coulda had a V8!" Oh, well. Fare thee well, Marat. At least you'll always be hot.
Female: Amelie Mauresmo. Hell, there's no shame in retiring with two Slams. In retrospect, that was probably about as far as her abilities could take her, considering her contemporaries -- Martina Hingis, Lindsay Davenport, the Williams sisters, the Belgians. When she was quoted last year as saying that playing in front of half-empty stadiums wasn't doing it for her, you could see the end was near. Even when she peaked against this season, and looked like she could do some damage, she seemed uninterested in the work that went into getting those results. But whatever makes you happy, right? Wonder what she'll do next. She doesn't seem like the knitting type.
OK! I'm off to prepare for my social rounds for New Years! Everyone have a safe one and pick one part of your tennis game you're going to improve for 2010. (I'm choosing the forehand. Oh, and the volley. Also my backhand.) I'll be back for more on Jan. 13.
Posted by Naf at 12:31 PM 8 comments: Links to this post