We Really Having the Australian Open, Huh: Did Not Turn Out Bad.

This tournament has had more plot twists than usual, and let's face it, the Australian Open always comes out wonky.
But Serena Williams and Naomi Osaka both out early? Coco Gauff beating Osaka, then losing to Sofia Kenin?
Let's just unpack it all now, shall we?

A(nother) star is born
Congratulations to Sofia Kenin, who played one hell of a tournament. And she did it not with power, but persistence. I mean, she beat Gauff, who everyone (me included) thought could win after Serena and Osaka went out in early rounds. Then Kenin beat the No. 1 player in the world and home favorite and THEN she beat Garbine Muguruza who also beat a few strong favorites (Elina Svitolina, Kiki Bertens, and Simona Halep) to get to the final, after having lost the first set and having nearly been broken early in the third! (Oh, watch this. This is what I'm talking about.) And with this Kenin result, and with other younger players coming out and up, like Osaka, like Andreescu -- did Muguruza miss her window for Grand Slam dominance? That might be a crazy thing to say, considering she just advanced to a Slam final again. But this result reminds me of the Andy Roddick loss to Roger Federer at Wimbledon in 2009 and what it meant for Roddick. He never had a sniff again at a Slam final. Then he just got crowded out of the top echelon. Who knows with Muguruza. She's still young and has a great game, but between she and Karolina Pliskova, I'm wondering.

OK, maybe this isn't fair
Congrats again to Kenin ... pending her MAGA background check.
I'm sorry, I am just gun shy because some young Americans trying to assert themselves in the game also had to scrub their social media clean because it was full of offensive comments aimed at gay people. Others openly advocated for the current president to come to see him win Wimbledon (as ifffff).
Of course, you can believe whatever you want. You can believe wind causes cancer. You can believe that you have the best words. You can even ask everyone to believe that you are innocent of bribery even though you won't provide evidence of that innocence or allow anyone else in the know to testify. I can believe that if you support that nonsense, I'll be rooting for your opponent every time. I'll also be wicked-laughing at every one of your blown match points against an injured Roger Federer and noting with interest that at the net, Roger didn't seem that impressed with you.
And as an American fan, I'm still a bit miffed with the USTA failing to address the Sandgren situation when it happened. So again, I'm gun shy.

This Olympic selection process is gonna be ... fraught, yes?
I'm guessing that one of the few reasons that Venus Williams is still on tour is to get another bite at Olympic glory. Serena Williams, although in a better position, is probably thinking the same thing. Now, Serena isn't even the No. 1 American -- it's Kenin. Then there's Gauff -- and Madison Keys. And Alison Riske. Also Sloane Stephens. Pretty sure there are only four slots and this weekend's Fed Cup tie against Latvia will feature Serena, Kenin, Riske and Gauff as singles players, and playing a Fed Cup tie is a requirement to qualify for the Olympics. This will be very interesting to watch through the summer.
Geesh, Danielle Collins, too.

There's a Thiem here
OK, I am feeling sorry for Dominic Thiem and I barely know him. OK, I don't know him at all, but let's focus, all right?
Thiem is as ready for a major as Kenin was and yet he came up empty again against Mr. Houdini Novak Djokovic.
Djokovic will go down as one of the best that ever was, and Thiem alluded to this moment in tennis, playing in a time where three of the best of all time are playing at the same time. The good thing for Thiem is that Federer, Rafa Nadal and Djokovic have to quit at some point during his career.
Of the Big Three, Djokovic does seem as if he's the least revered. I only say that because no one seems to like Djokovic much. The crowd reactions to him are, uh,  ... not what they are for Federer. (I don't endorse the clickbaity headline -- just the video.) Did anyone else hear the crowd in the last game? They were pushing *hard* for Thiem. Ultimately, of course, it doesn't matter if the crowd likes him or not because he figures out how to get it done either way. But in this win, and its aftermath, I detected something a little different from Djokovic -- humility. No overt gesturing to the crowd, the kind he usually does that all but cries out, "Like me! Like meeeee!!!!"

Doubles is where it's at
Early on in the mixed doubles, there was a 10-minute "conversation" that grew in intensity involving all four players on the court: Jamie Murray, Bethanie Mattek-Sands, Barbora Strycova and Marcelo Melo. Here is the condensed version. There's a lot of versions of this argument online and most of them involve Strycova being called a hothead. First, she was not the only one involved in this dispute. Second, she was right! Hi! And it took 10 minutes because Murray and Mattek-Sands decided they didn't like that their challenge call was a hindrance. All I'm saying is Strycova is always right, so why bother?
Murray and Mattek-Sands made it to the final where they lost to a woman who won this tournament last year (?) and a guy who I'll refer to now on as "almost Chris Pine": 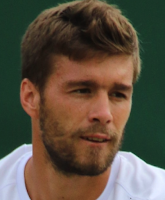 So close -- especially if you squint and close the one eye.
There are worse things to almost be, Nikola Mektic. Like almost Australian Open mixed doubles champs. Mektic and his partner Barbora Krejcikova ran the super tiebreaker and looked like they will probably play together again at some point. 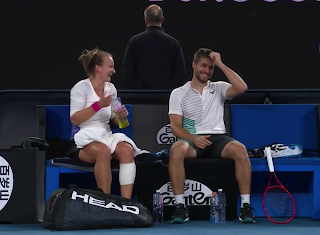 And Bethanie and Jamie ... are gonna need a minute. 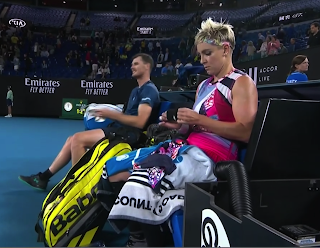