Coffee at Wimbledon: The Women

I look at this draw and a few questions come to mind: Whatever happened to Garbine Muguruza? What if Venus loses to her clone? Does Maria Sharapova have one more good run in her -- at, like, any event? What if Ash Barty and Naomi Osaka begin a legendary rivalry that starts right here at Wimbledon? Andy Murray wants to play mixed with which sister? The one who has never been that great a volleyer? Oh, OK, got it.
Anyway, let's check out this draw before I smack Murray upside the head with Venus' racquet:

Kaia Kanepi v. Stephanie Voegele: I think the Kanepi Upset Effect only works when she's playing a top seed in the first round, but worth keeping an eye on.

Belinda Bencic v. Ana Pavlyuchenkova: I did have to cut-and-paste that one. So Pavly is a tough competitor and although Bencic looks like she has rediscovered her court legs, this will be a test right out the gate.

Su-Wei Hsieh v. Jelena Ostapenko: What a world. Ostapenko won the French Open, like, two years ago and is now unseeded. Hsieh has one of the most entertaining games out there right now. So this should be ... something.

Victoria Azarenka v. Aliza Cornet: This one's gonna take a while and will involve at least four impassioned entreaties from Cornet to the court umpire with very dramatic hand gestures.

Venus Williams v. Coco Gauff: So in preparation for this post, and this entry, I did go ahead and watch the most recent match I could find of Gauff and it happened to be the one in Wimbledon qualifying where she beat the top seed. She's 15. And I hate to be that person, but watching her reminded me of Venus' game. Didn't see much of her at net, which is where Venus might consider going to win this match. Yes, the similarities are compelling, but this is Venus' best Slam, and even now, in a sort of lull, I don't think this will be a big brawl for her. That'll probably come later, against Aryna Sabalenka. 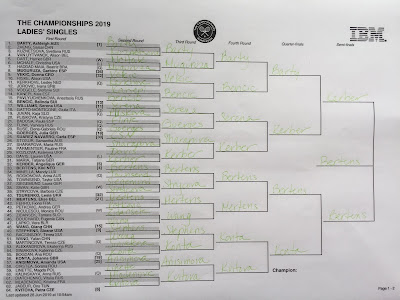 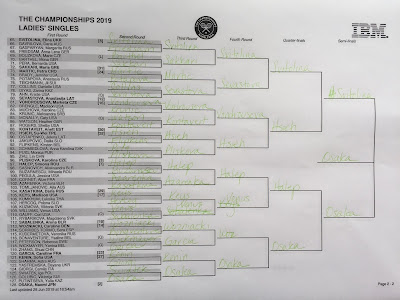 Some of these are obvious. Based on what we've seen this year from Serena Williams, it is just hard to see her beating an in-form Angelique Kerber. I mean, Julia Goerges could beat her in the third round. And Kvitova is always good on grass, but Johanna Konta has actually been doing well on it over the last couple of weeks, so she gets a very slight edge.
Hsieh's my fun pick. I know Pliskova just won a grass warmup, but she doesn't bend her knees. Don't any of you find that odd?

Who's Going to Win?
I am not sure! I would give Barty and Kerber the best odds. Osaka has a good draw through to the semis, but she has not been consistent lately. But she's a kid, too, and is the holder of two Slams. I also think this conversation really hinges on the health of Kvitova. If she's ready to go, she is going to be hard to beat. I guess what I'm saying is we'll see.