Coffee at Wimbledon: The Men

I'm sure that nobody but me remembers this, but back in the day, people who won the French Open, or did well at that tournament, used to go into hibernation until just before the summer hardcourt season. The conversation around who had the upper hand from the French to Wimbledon used to feature two entirely different sets of players, and now? Well, things have changed, meaning that Rafael Nadal is as much a contender as Roger Federer. Yet, there are still the specialists. For example, this is the only time of year you hear the name Dustin Brown. Then there are the newbies still trying to prove themselves (not looking at you at all, Alexander Zverev. I wouldn't want you to double fault). So let's dig in (which you should never really do on grass unless you're some kind of barbarian)!

Early Rounds to Watch:
Novak Djokovic v. Phillipp Kohlschrieber: I mean, just because. Rolex has all those great commercials featuring tennis players from the past, and I'm not sure why Kohlschrieber isn't in those commercials because if anyone can tell time and history, it's the guy who's been on tour for 38 years.

Dominic Thiem v. Sam Querrey: What? I mean, what? How are you the No. 5 seed and end up having to play Sam Querrey at Wimbledon in round 1?

Frances Tiafoe v. Fabio Fognini: Fognini's been en fuego lately, but Tiafoe's having a decent year, too. Interested to see how these styles match up.

Rafa Nadal v. Nick Kyrgios: This is a potential second-round match-up and I don't know what to say really, except that they talk about women being moody and unpredictable, and they never once mention Nick Kyrgios.

Who Are Our Quarterfinalists?
Ah, fine. Let's dust off this heavy crystal ball: 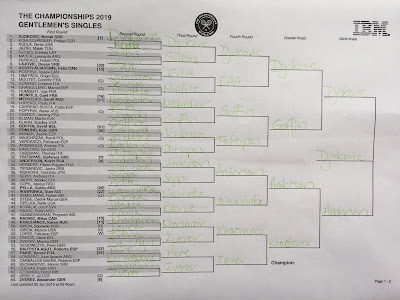 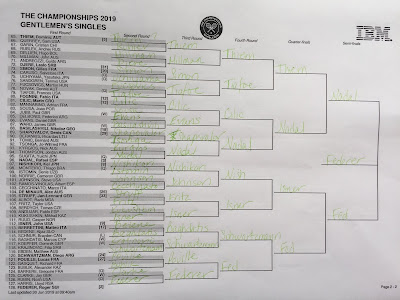 I don't understand how you're the top seed and you get a harder draw than the No. 2 seed. I mean, I do, so don't @ me. But man, Federer, barring some wild circumstances, could handle this draw blindfolded up to the quarters. I think Djokovic will get there, too, but there's Gael Monfils, there's Grigor Dimitrov, there's young Canadian Felix Auger-Aliassime (what a name, amirite?) and also Ernests Gulbis, who is another one who will show up when he is good and ready.
Nadal has got a lot going on, too. If he can get past Krygios, there's Denis Shapovalov and Marin Cilic to think about.
Regular readers of this corner of the Internet know that if I pick Isner for anything, it's got to be a virtual lock and impossible to deny, but I still hope against hope I'm wrong here.

Who's Going to Win?
I do think we're looking at a Federer/Djokovic final, with a chance for Zverev in the top half. He really has a good game for grass, but he's got some head things going on, too. I also think there's some space for Thiem. He doesn't get great results on grass (and didn't even bother with warmups this time around, so) but his game also would seem to translate well. Maybe taking a set off Nadal at Roland Garros will lift his confidence?
Anyway, I'm going with Djokovic. He's just been too much for Fed lately. OK, gonna do the same for the women and then find my strawberries. I don't have cream. Is milk an acceptable alternative, or ...