Dustup in Paris: The Women's Preview

About three or four weeks ago, I would have discounted this women's draw as nothing to write home about. But the clay-court season was super interesting. Who knew Maria Sharapova's game would arise from the grave and begin hitting drop shots?! And Elina Svitolina's game, so boring and yet so effective, showed consistent results, even a win against top-seeded Simona Halep. Petra Kvitova's over here winning on clay. Sloane Stephens grinding out some wins, and looking pissed almost the entire time. Also, Serena Williams is playing her first major after maternity leave. Let's get into it: 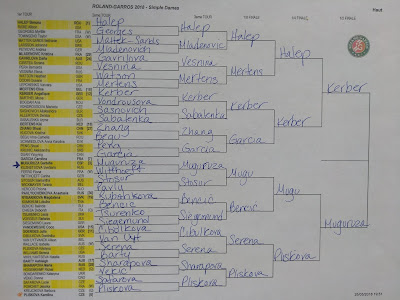 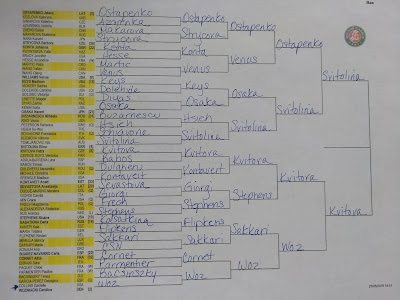 I've been off the blog for a minute, but I have been watching tennis. So the first thing that's worth noting is just a quick rant about Karolina Pliskova. She got fined some thousands of dollars at the Rome tournament for just straight trashing the match umpire's chair after losing in an upset in the third round. No one's saying how much she was fined, just that it's four figures. I'd like to point out that Serena Williams got fined $82,000 for threatening a linesperson once. With her racquet, yes, but there was no physical contact. Pliskova hit a chair that someone was sitting in. Repeatedly. And maybe it's just me, but the fact that she first reached for the ump's hand, and then hit her chair makes that thing a little more direct. So she should have gotten a tad bit more than a four-figure fine.
But alas. She is our second seed. So that's cool.
Phew. Off my chest. Garbine Muguruza and Svetlana Kuznetsova are playing each other in the first round. How does Muguruza get a worse first-round draw than Serena? Muguruza should make her way through, but I have no idea what's going to happen between Danielle Collins and Caroline Wozniacki. Woz's clay season has not been ideal. Collins hasn't been that much better, but she is having a breakout year, and when you put that against someone coming off her first Slam win, well. Just get the popcorn ready.
Now, Serena. I know everyone is all jacked about her return, myself included. But does Serena have a chance to win this tournament? Her quarter of the draw includes Muguruza, Sharapova and Pliskova, all of whom have been playing on tour regularly. She's in the same half with Halep, with Kerber, with even Elise Bertens. She's probably in the tougher half of the draw. Who wouldn't love to see a new mom come out and muscle her way through this draw, maybe even play Venus in the final again? I guess I'm saying that Wimbledon is right around the corner, fam.

This is really interesting information for me. Thanks for sharing!