The Attitudimeter: There's No Crying in Tennis

Julia Goerges
The thing I love about writing about sports is that there's no crying in tennis. No emotion, no muss, no fuss, just sports.
Oh, what? You want me to watch this video of Goerges winning her first title in more than six years? Fine! No biggie:


Garbine Muguruza
I'm OK now. Whew. I need some snark in my life, stat:
Picking a WTA Player of the Year this year is a little like picking the worst Donald Trump tweet of 2017. Like, where do you start? They're all terrible! I'm not saying the WTA has been terrible, but no one has stood out. Sure, after a Slam, they stand out. No one has been consistent. No one. Muguruza's spotty season (slam, Cincy, World No. 1 for 10 minutes) is among many spotty seasons among the POY candidates. So spotty that folks were writing in Serena Williams as POY despite her playing, literally, two tournaments this year. One of them was the Australian Open and she happened to be pregnant at the time. I don't know. She's got a case, too. They all do.

Juan Martin del Potro
Listen. Juan Martin del Potro could lose in the first round of Star Search and make this list. Who doesn't love this guy? Sure, he got smoked by Rafa Nadal and Roger Federer recently, but he just won the Stockholm Open, his first tournament win since ... the same tournament the previous year. Glad to see that tumble he took in Shanghai wasn't too much of a problem. I mean, dude deserves a break.
Not that kind of break. The other break.

Half of the ATP tour
Not literally, but in this past week alone, Nick Kyrgios and Tomas Berdych said "nah" to the rest of the season. Off the top of my head, I believe we are now at Novak Djokovic, Andy Murray, Kei Nishikori, Milos Raonic and Stan Wawrinka as major contenders who started 2017 on a court and ended it on a stretcher. We

Barbora Strycova
We all know that you won't like Strycova when she's angry.


And now, have mercy, she is angry at her fellow Czech Karolina Pliskova, who apparently stole Strycova's coach behind her back.
"Our relationship is zero. We do not go for coffee," she told the press.
No coffee.
This is serious.
Strycova said she'll still play Fed Cup if Pliskova is on the team, and if I were Pliskova, I would not play doubles with her again. That's right -- with her. Strycova knows just how to set up a point to get her partner blasted out of her shoes. Would she actually do that? I'm gonna refer you to the video above.

The WTA Rankings System
How are you going to lose 10 matches in a row and then still manage to end up moving up the rankings into the top 10? That's a question best asked of Kristina Mladenovic and the WTA rankings system. Maybe let's throw in the rest of the players, too. Yo, these guys had almost a year to wreak some havoc while Serena Williams was out and instead of people taking their shots, we have folks moving up the ranking having done nothing at all. I'm done with this topic, I think.

Maria Sharapova
Fresh from winning her first post-ban tournament, Maria Sharapova rolled up at the Kremlin Cup, probably popping the collar, feeling pretty good about herself.
She didn't stay long, losing in some erratic tennis to Magdalena Rybarikova in straight sets.
I admit that I'm tempted right now to make a joke at Sharapova's expense. But I think I may have been a bit rough on Sharapova. Maybe, I thought, I might try a bit harder to understand her, so I decided to go out and buy her book. I guess the first run sold out, because all I could find was this updated version: 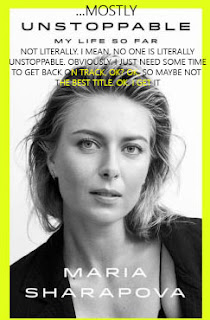 Should I buy it?