Postscript: I Went to the U.S. Open!

For the last eight years or so, I'd been telling myself that next year, I was definitely going back to the U.S. Open. But then I'd think of the logistics -- travel, child rearing-related stuff, finances -- and I'd talk myself out of it. This year, I had a bonus incentive. Earlier this year, I'd found myself back in Brooklyn for an unpleasant event -- my father's funeral. It could have been the sentimentality of the moment, but I actually found that I missed my hometown, and wanted to spend more time in it. So I booked my ticket and landed back in New York, and even in the house I grew up in (my mom still lives there).
There was more than one reunion happening. I found out that one of my old co-workers from my first job in newspapers was now covering the Open for a bunch of publications wanting local content on their hometown players. He offered to buy my ticket in advance so I could avoid the long lines of the olden days. I'm old enough to remember when you had to go to Flushing Meadows at the crack of dawn to buy grounds passes. I am sorry, but that is not happening for me on a vacation, no less. So, yes, Michael, thanks for that.
I was glad to know that Michael would be there because as the day drew closer, it only then occurred to me that I would be wandering around the Open by myself. Which you can do, of course. I generally prefer fewer people around me anyway, but what if I got to see Venus Williams (which, yeah, was another good reason not to wait any longer to go to this tournament) and had no one near me to shake maniacally after she hits a winner? I had sort of assumed the answer would be "no one" until a random conversation with my mother. Not only had she never been to the Open, but she really wanted to go! So did my sister in New Jersey. So off we went!
The Billie Jean King Tennis Center is completely different from the USTA National Tennis Center. Same location, completely different experience. The old place was really homey. I still remember walking on the grounds one year and Martina Navratilova just passed me, heading to her match. In the common area! That was one thing I looked forward to every year, but that part of it is largely gone. I did see Amelie Mauresmo shuffling her babies around (I think), but that was just about it. So where were the big wigs? Well, I figured that out by accident, when we stumbled upon a fenced-off area for VIPs. You had to show a badge to get back there. I tried to tell the security guy at the entrance that I was the CFO of JP Morgan Chase, but that I had just forgotten my badge, and I think I almost had him persuaded, but ultimately, we did not gain entry. Ah, well.
I knew I'd only be in New York for a few days, so I had to choose which day I'd be going to the Open. After a lot of back and forth, I finally decided on the first Wednesday -- and I chose wrong. Kind of. (I'll explain in a moment.) Once I got to NYC, the forecast suggested perfect weather throughout my stay, except for one day. Can you guess which day?
Still, the rules have changed a bit for access to stadium courts with grounds passes, which meant that there would be some tennis for us. Armstrong Stadium, which has a roof, would have play that day, as would Ashe, which still cost extra to get into. When we got there, Kei Nishikori was working to wrap up his second-round match with American Bradley Klahn. Nishikori was a game from winning the match in the third set, but blinked (napped might be better term because he went away for a bit), before finally prevailing in the fourth set. By then a lot of us were rooting for him to win quickly because of who was next up.
This is why Wednesday wasn't a total loss. 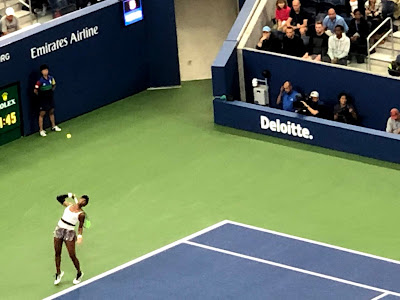 That's right. Venus Ebony Starr Williams. (And Gael Monfils in the second row.)
The main thing I wanted when I went to the Open was to see Venus play. That's why I chose the first week -- and early. I hate to say it, but you never know. Especially because if Monfils was there, it wasn't to root for Venus -- it was to root for his girlfriend Elina Svitolina. This was not a kind draw. Venus' record against Svitolina wasn't good, either, but given the surface, I thought there was maybe a chance. Maybe.
We were way up there in the stadium during the first set, and it was still a great seat. Check these out:


This angle can also be misleading ...

Well, everyone knows by now how this one went. I was pleasantly surprised to see Venus keep it so close and not so surprised that she double-faulted under pressure at the worst times. I'm about to start a GoFundMe for a coach who can finally get her out of that.
Of course, because of the rain, we were in Armstrong most of the day. (Michael had upgraded my seat to get into Ashe for the day session, but there was more going on in Armstrong, and so I ended up eating that extra five bucks. Oh well.) We kept jockeying for closer seating and slowly, but surely, it worked. Next up was Madison Keys against Zhu Lin, which was over by the time we got comfortable in better seats. 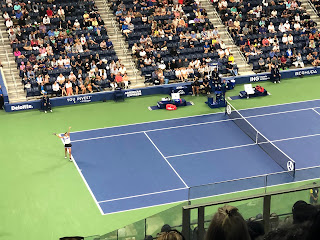 (That's Keys' serve, in case you couldn't tell.)
Then I consumed the most expensive personal pizza I've ever eaten. It was *checks wallet* yes, 14 dollars. Well, when you have a captive audience ...
Anyway, by this time, we were approaching the night session and I wanted to stay because if I could I would just live at the BJK Tennis Center and arrange my life around it. But I had company and I was almost afraid to ask them if they'd be down to stay for just one more match. Of course, they said.
(My family is great.)
So we got to watch Ash Barty take on Lauren Davis, which looks like an overmatch on paper. In person, and even from a distance, the size difference was obvious, too.


Lauren Davis is another one of those players who just has more K-tape on her each time she shows up to a tournament. Bless her heart, which is much larger than she is. She pushed Barty in this match and it might have been the best one of the day.
Then we went home. For an abbreviated version of the Open, it was still pretty great, and plus, we get a raincheck for next year. Which, uh, means we're going back next year. Which means I need to start saving up for lunch NOW.
Posted by Naf at 12:07 PM