So You Say There's a Hard Court Season Going On

Lots to catch up on over from the last few weeks. Let's stream-of-conscience right in: 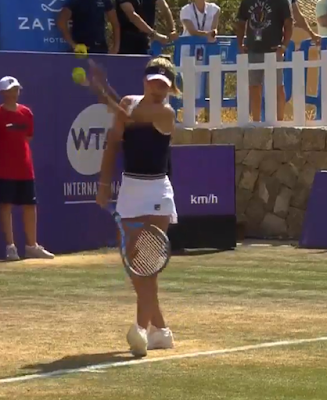 1. Things Sofia Kenin Thinks About As She Avoids Eye Contact With the Ball She is About to Strike:

2. Venus Williams calling her coach down so he could fetch her a coffee is truly the best use of on-court coaching I have ever seen.

Was pretty disappointed to hear Venus was calling for a coach mid-match until I heard why. #likeasap https://t.co/W1z0faln2O
— NewRacquetWhoDis (@TWA_tennis_blog) August 16, 2019


Venus made the quarters at Cincinnati, losing in the quarters to Madison Keys. Despite the scoreline (3 and 4), it was pretty tight. Still, Venus is not really herself anymore.
It will always remain an injustice that she had the season she had in 2017 -- had an edge on Muguruza in the Wimbledon final -- and didn't get one Slam title out of it. On days like these, I feel like that was her last, best chance. Some have speculated that she's still playing for the 2020 Olympics, to which I would say, "why?" (If she were trying to get on the team, she'd have a hard time qualifying, especially because there are three women who right now would be named to the team over her, no question. You almost have to choose Bethanie Mattek-Sands for doubles, and that leaves two spots. Would either Williams sister get one?) I really try to never be that person to second-guess someone's career and how long it should last, but I don't know why she's still doing this, especially playing singles. She obviously isn't moving the way she used to, and you can still set a clock to her double faulting in tight moments, such as last night late in the second set. If I saw some improvement in her game, I'd feel differently, because it would be a sign of her working to tweak it, even if it didn't always work. Maybe this doesn't feel like the right time for this conversation -- she did just have the best run of her season. But that run was winning three matches in a row. Against a couple of quality opponents, but still. I hope I'm wrong. I hope she's got another 2017-like run in her.

3. Am I the only one who can't spell Cincinnati correctly the first time?

4. I got a question over on Facebook about Nick Kyrgios. I was running around like crazy this week, and didn't get to see his latest antics until after his match. Here you go!

I don't understand Nick Kyrgios. I think he tries. He's even playing doubles with the only guy on tour with rainbows coming out his ass and I thought he was trying to have more fun, be more positive. Then this type of nasty display comes and I think about that New York Times profile about him in 2016, in which his lack of passion for tennis was on display. It would be a shame to lose one of the most naturally talented and entertaining tennis players of this latest crop, but I don't think tennis makes him happy, so why is he doing it?
If you want to get to the nuts and bolts of what started this -- a serve-clock violation -- I'll say this: You can be right in an argument and still be wronged, but being wronged does not give you free reign to do whatever it is you want in response. Things you don't deserve happen to you more than they should, which is never, as you don't deserve them. But they happen. Your response is directly tied to your level of maturity. If you've watched enough tennis, you've seen a player get a penalty they didn't (or think they didn't) deserve. It's not as likely that you saw that player drag this injustice around with them for the remainder of the match like a soaking wet rag doll. I mean, at the end there, it looked like he spat in Fergus Murphy's direction. That is, um, yeah ... extra.
(Why did he give away a busted racquet?)
Posted by Naf at 10:07 AM