HOMELAND SLAM: A Sea of Red

I had a lot of fun filling out the women's draw. Was feeling pretty good about my choices. And then the tournament started. 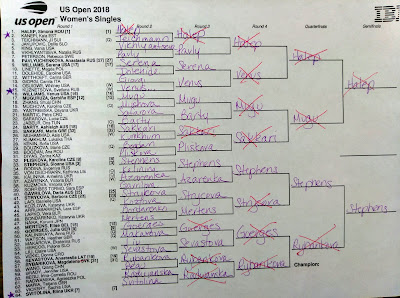 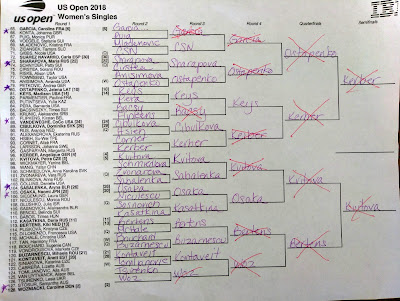 Anyway, this year's U.S. Open has had a lot going on, which is something of an understatement. On the first day, Simona Halep lost and it turned out that there wasn't a heat rule for men, which is ... something. On the second day, Alize Cornet changed her shirt on court and an umpire, upon viewing a sports bra, was more offended by that than the bare-chested men he no-doubt sees at least twice a week.
We all know about Mo Lahyani's free coaching session by now. This whole episode, which -- don't get me wrong -- is wild, still illustrates something I've been trying to point out for a while. For much of the tennis calendar, women are encouraged to get coaching -- it's actually a feature that is apparently a fan pleaser. (?) But if a man gets a whiff of coaching (also this week, Andy Murray reported to his match ump that his opponent that day, Fernando Verdasco, had been getting advice during the 10-minute break due to heat), this is viewed as very bad.
Yes, I understand that the coaching they were receiving was against the rules, while the women being coached during the year is a rule. But the existence of this rule suggests this notion that women somehow need it, which sort of flies in the face of the idea of equality in the sport. I think on-court coaching is a crutch, but if both men and women were allowed access to it, it would be just another thing I didn't like about tennis, and you wouldn't have Twitter exchanges like this between a male and female pro 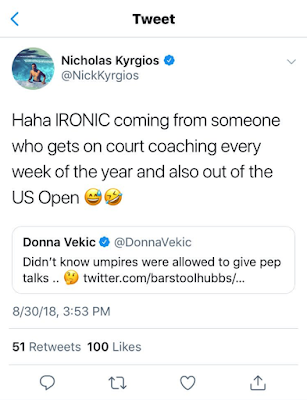 where I would be in the unenviable position of agreeing with Nick Kyrgios. (Yes, this is that Donna Vekic. Yikeys.)

Predictions. I hate to embarrass myself and keep making very wrong picks, but I also cannot resist offering thoughts. First, Maria Sharapova's advancement through this draw has been behind some of the ugliest tennis I've ever seen. But maybe also behind some of the luckiest. Sure, when she beat Jelena Ostapenko yesterday, her winners/unforced errors ratio was 11/18, which isn't great. But Ostapenko's was 10/41. Also not great.
Second, I am still unsure of what to make of Serena Williams. But the way she took down her own sister the other day was savage and if she's willing to do that to her own sister, the other players in the draw should be at least aware of that. Now pardon me while I go make some popcorn to watch Williams/Kanepi.