I did a U.S. Open preview 10 years ago. Which makes this blog the thing I've been most committed to in my whole life. Which, yes, is a little depressing. But the point was to mention that here is that this is how my preview began 10 YEARS AGO: 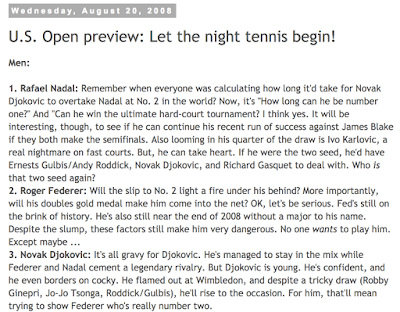 Nadal and Federer are astounding tennis specimens is what I'm getting at. OK, let's get back to the future: 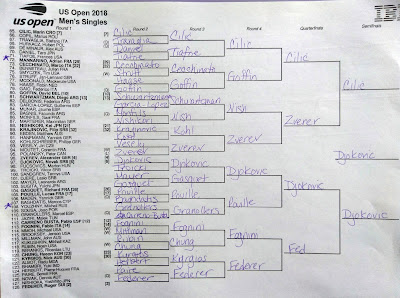 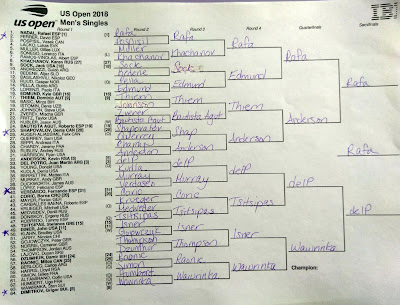 1. Rafael Nadal: So far, Nadal has had a strong year, and stayed fairly free from serious injuries. His draw here is better than most, although Karen Khachanov could end up being a situation. But his hardcourt warm-up was judicious and sharp, and when he's fit, as it appears he is now, you gotta tag him for at least the semis.
2. Roger Federer: Federer's looked good too, this summer. No hardware like Nadal, but pretty sharp until he came across Novak Djokovic. His quarter here is full of minefields. Nick Kyrgios in the third round, which ... well, you know. It depends on which Kyrgios shows up, if he's in a good mood, if he brought his tennis kicks instead of his basketball shoes. Djokovic is also in his quarter, so he's going to have to get a bit sharper than he was in Cincinnati.
3. Juan Martin del Potro: Any major with del Potro in form is better for it. He'd face a group of tough competitors on the way to the semis -- Andy Murray, the Greek Stefanos Tsitsipas and maybe John Isner or Wawrinka. But as long as his wrist is feeling good and he's able to spank forehands all over the place, it could be a good tournament for him.
4. Alexander Zverev: If Zverev should again determine that this is his time, it's actually a decent time! He could run the table up to the semis if he wanted. His main obstacles could be Kei Nishikori, who is pretty steady and Marin Cilic.
5. Kevin Anderson: I tell you what, I thought Anderson was pretty lucky to get to the U.S. Open final a couple years ago, but it would appear it wasn't luck. If he hadn't been screwed over at Wimbledon with the schedule and the twelve-week match against Isner, he might have won the tournament.
6. Novak Djokovic: The way he's been playing the last couple of months, it's hard not to imagine him in the final. Of course, this is also the same person who lost to Taro Daniel, Marco Cecchinato and Bernard Paire this year.
7. Marin Cilic: Is it me, or does Cilic look like he plays with a chip on his shoulder these days? He's just been fired up lately. I'm picking him for the semis, too.
8. Grigor Dmitrov: I wonder if there's ever been a player -- any player, no one specifically -- who wouldl ever show up to a tournament feeling good and then looking at the draw and then just feels like packing up his gear and going home. Just a random thought I had. Oh, and by the way, Dmitrov's opening round opponent is Stan Wawrinka.
9. Dominic Thiem: Who even knows. Dude basically fell off the map after the French.
10. David Goffin: Kind of surprised he's in the draw. He's apparently struggling with a shoulder injury, so not expecting too much.
11. John Isner: He's in the Wawrinka quarter (sorry Dimitrov), so he's got a chance for a good run.
12. Pablo Carreno Busta: I'm not trying to be a jerk, but how is Carreno Busta seeded this high?! I'm really not, but ...
13. Diego Schwartzman: I really like his game, but he's stuck in Zverev quarter and there's a lot of talent in there. I don't know about this year, buddy.
14. Fabio Fognini: See. No. 12.
15. Stefanos Tsitsipas: This kid is crushing it lately. This summer, he's beaten Djokovic, Thiem, Zverev and Goffin. He's obviously having a lot of fun doing it, too. Do yourself a favor and follow him on Twitter. He's living that life right now. As for this tournament? If he touches a hair on del Potro's head, he's dead to me.
16. Kyle Edmund: He's got a pretty meat-and-potatoes type game, not real flashy, but effective. Not sure he'll be able to get past Nadal in the fourth round, though. Side-note: If I told you Edmund was only 23, would you believe me? I wouldn't have pegged him for a day under 40. Just saying.

First round matches to watch:
Wawrinka v. Dimitrov: As noted, I'd be stunned if Dimitrov got out of this match.
Nadal v. Ferrer: So long, David!
Shapavalov v. Felix Auger-Aliassime: I've not seen this Felix guy yet, so I'm excited to see what the hype is about.
Fernando Verdasco v. Feliciano Lopez: One of the great disappointments of this blog will be that my nickname for Verdasco, Hot Truth, never really took off.
Adrian Mannarino v. Frances Tiafoe: UPSET WATCH
Marcos Baghdatis v. Mikhail Youzhny: I hear they're giving out free walkers after this match. To the players! (rim shot)
Isner v. Bradley Klahn: I was going to make some tasteless joke about Isner playing his first round against someone whose last name is Klahn, but then I decided not to.