Wimbledon for Breakfast: On the Menu? Nothing Involving Seeds, Apparently.

Dominika Cibulkova and Serena Williams have advanced to the second week of Wimbledon and almost none of the top 10 seeded women can say the same. This is just the top half: 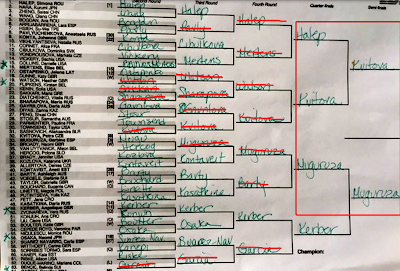 It's probably redder than that -- this was just off the top of my head. It's exhausting. Having said that, what a tournament! Let's not forget the resurgence of Ernests Gulbis and the early upset of Grigor Dimitrov by Stan Wawrinka (while his girlfriend Donna Vekic beat Sloane Stephens in the first round). Kei Nishikori's takedown of Nick Kyrgios is also of note. And it would hardly be a Grand Slam tournament without Caroline Wozniacki whining about something really inconsequential. We can talk about seeds and whether they matter, and who should have been seeded and who shouldn't have. Or we can just take a look at the best moments of Wimbledon so far, according to me. We're gonna do the latter.

Kyle Edmund got about three levels of lucky here. He got credit for a double bounce, hitting the net early AND for hitting an out ball. I feel as though he was aware of at least one of these factors, as he surgically removed himself from the discussion between Novak Djokovic and the line judge. Perhaps if he had owned up on that point, Edmund would have saved some luck for later in the match.

If you're a Venus fan, it's torturous watching her in these titanic battles. At the same time, she is still in these matches, still a factor and still able to win. After the French Open, her coach said something about Venus not really picking up on opponent weakness

David Witt shared his thoughts about Venus' 1st-round loss at the French Open with @HowardFendrich yesterday. Worth a read. 👇🏽  https://t.co/KHD7QMxM6w pic.twitter.com/cpUzPop8qM
— Chad (@CCSMOOTH13) May 28, 2018

and in watching her against Bertens, I kept wondering why Venus was staying back when she had such success at net.
And another thing. Watching Venus press conferences (at the end of the ESPN clip) is now worse than having a root canal. Here's what I propose:
1. Venus walks in.
2. Enterprising journalist says, "You got anything to say?"
3. Venus says, "Nope" in no particular type of tone.
4. She stares at room. Room stares back.
5. Venus leaves. Everyone feels less awkward now.

No. 2:
Bahmahgawd Ernests Gulbis is back

First, it seems as though ever since Alexander Zverev yelled "It's my f***ing time!" at Roland Garros for the world to hear, it has indeed been a time for him. A fifth-set-bagel-to-a-player-ranked-outside-the-top-100 kind of time.
Second, Gulbis' forehand prep now looks like a bird in flight, and I don't think it's supposed to be like that, but (shrug emoji).

I asked Serena Williams if she minded always being the one to beat.
Her answer blew me away. #Wimbledon @serenawilliams @Wimbledon pic.twitter.com/XsHI26FSi4
— Jamie Johnson (@JamieoJohnson) July 7, 2018

So here's the thing. Serena Williams has been saying stuff like this for years (as has her sister). And for years, everyone has thumbed their noses, wondered who exactly she thinks she is. Maybe a few years ago, I would have thought it was a bit much.
But it appears that the sisters Williams, as always, were ahead of the curve. In the intervening years, we -- meaning women -- have come to understand that it's OK to acknowledge your talents. That's because in general, no one else will acknowledge them for you. Recently, I discovered a tic in myself at work to apologize for other people's mistakes, and to shoot down any compliments. I've done it for years. No one taught me to do it. It's society's default position for women and we tend to fall in unconsciously. But that's ridiculous, isn't it? What the hell is the point of doing anything if you don't think you do it well? Why crawl out of bed in the morning in the name of mediocrity? You don't. That thing you're good at? You know you're good at it and you acknowledge that to yourself. Acknowledge it to others, too.