So I'm filling out my draw yesterday and decided to take a Twitter break to see if we were in World War III or if Charles Manson had been let out of prison, and it's a good thing I did, because Andy Murray had decided at the last possible moment to back out of the U.S. Open. It's probably best he did, but if he had decided to back out a bit earlier, we wouldn't have our current situation. Like this thing: 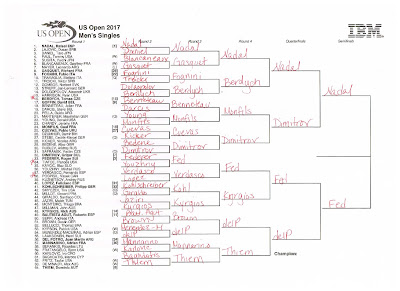 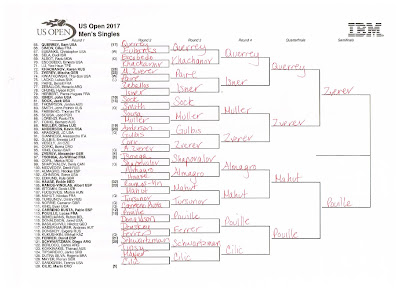 This was a tough call for Andy and maybe, just maybe it's time to talk about the 11-month tennis season.
No? Too soon? OK.
But anyway, now the bottom half of the draw is not as, let's say, robust in talent as the top half. The top half now features the two favorites to win the tournament -- Rafael Nadal and Roger Federer. Nadal, who is now in 2017 the world No. 1, has a couple potential issues on his way to the semis -- Richard Gasquet, Tomas Berdych and Grigor Dimitrov.
Nadal has looked good at the Slams, but lost to some Canadian kid in oversized clothing at the Canadian Open a couple weeks ago and then Nick Kyrgios more recently. Still, he's the favorite to get through that part of the draw, as is Federer, who's got a dicier situation going on, and who also is coming off an injury layoff. There's Dominic Thiem, Juan Martin del Potro and Kyrgios (who apparently has trouble playing nobodies but gets geeked up to play the Federers of the world).
I'm just saying that if Andy had pulled out before the draw came out, Federer might have the bottom draw to himself. As it stands, everyone in the bottom half of the draw has the draw to himself. Especially the bottom half of the bottom half. Someone said it looked like the draw of a Masters 250 now. This isn't inaccurate. There's Nicolas Almagro, Nicolas Mahut, Lucas Pouille, David Ferrer, oh!, and ex-U.S. Open champ Marin Cilic. Also Denis Shapalavov, the Canadian kid. And to think all off this real estate could have belonged to Federer. Sigh. Without playing Nadal until the final. Double sigh.
The top half features Alexander Zverev and he's also looked good this summer, having bagged a win off Federer at the Italian Open. Also in his path are Americans Sam Querrey and John Isner and maybe Ernests Gulbis and Gilles Muller. I mean, I filled out the draw, but do not hold me accountable for the bottom.

One last funny thing: The rule for late withdrawals call for the No. 17 seed to take the place of the second seed should there be a late withdrawal. I know. That's Querrey and before Murray's withdrawal, he would have faced a qualifier and now? His first round is against Gilles Simon, who is ... not a qualifier.
Looks like Murray came bearing gifts this U.S. Open.
Posted by Naf at 10:41 AM