What's Up Down Under with the Ladies?

The 2017 pro tennis season is underway and fraught with dramatic story lines, in both the men's and women's games. Can Angelique Kerber defend her title and her status as the world No. 1? What about Serena Williams? What about the upstarts? And what value can we place on warm-up tournaments?
Let's get right into it. 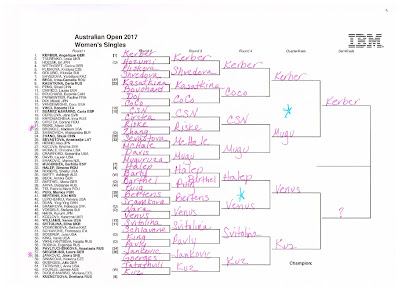 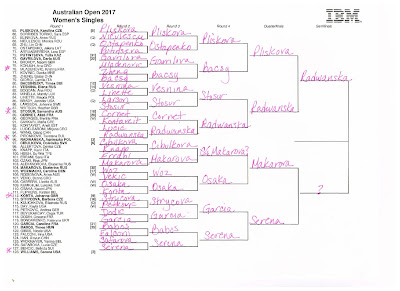 A few things worth noting:
1. If Serena Williams is going to win the Australian Open, it might have to be one of the most legendary performances she has ever orchestrated at a major. And she just started her season with a loss to Madison Brengle. This Madison Brengle.

So. Serena's first round opponent is definitely Belinda Bencic, who has already beaten Serena before and has a really good game. She struggled with back injuries last year, and if she's feeling better, well, yeah. I don't know. But let's say Serena gets out of the first round. She's likely to face the tricky Lucie Safarova, and up-and-comer Timea Babos. Looming in just her quarter: young gun Naomi Osaka, Dominika Cibulkova (who's always down to ruin someone's run at a major), Caroline Wozniacki and, well, Ekaterina Makarova, who has beaten Serena at the Australian Open before. Now, to be fair, Serena has a dominant head-to-head with Makarova, but, again, Madison Brengle. Should Serena navigate her way through that quarter, I think she's likely to face Agz Radwanska. But there's also Karolina Pliskova up there, and Sam Stosur. Obviously, in the final, she'd be seeded to face Kerber, but it could be Svetlana Kuznetsova, or Elina Svitolina, or Venus Williams or Simona Halep or even Garbine Muguruza, if she's finally recovered from the biggest win of her career, the 2016 French Open. Actually, if she could get out of the first week, you could say Serena's chances are pretty good in the second. But Madison Brengle. I just don't know.

2. A lot of people are really big lately on Johanna Konta, even going as far as saying she could win this tournament. Well, her draw's not real friendly, either. She gets Kirsten Flipkens in the first round. Now, if you are trying to ease into a tournament, work your way into it, getting better incrementally as you play, Flipkens is not really someone you want to see in the first round, as Venus Williams can attest from their match in Rio. Konta's second-round match would likely be against Osaka, who has a ton of firepower. Even if you think Konta could win that, she's in Serena's quarter. She has the same problems! But someone has to navigate them. Maybe it will be Konta. I don't know if I'm buying her yet, though.

3. Ms. Kerber. Sometimes, I watch her play and ask myself, "Does someone actually practice hitting like that?" Sigh. You know what they say, though -- there's more than one way to skin a tennis ball. Wait -- that's not right. Anyway. So Kerber is the obvious pick to advance to the semis here. There are dangerous opponents, but no one that should give her issues before the quarters. (Unless you count Genie Bouchard. I do not. Yes, I know she just beat Cibulkova.) It really does depend on where Muguruza's head is these days. If it's on right, then I'd choose her to win the whole tournament. But Kerber's head appears to be on just fine. She lost her first match in the warm-up event in Sydney, but her thoughts about the result (a straight-set loss to Daria Kasatkina, who is in Kerber's quarter in Australia, by the way), showed some pretty good perspective.

That's light-hearted and cold-blooded kind of all at the same time.

4. There is a lot of talent in the bottom quarter of the top half of the draw. I was buying Halep stock about a year-and-a-half ago. I'm selling now. She's No. 4 in the world, which is good. It's very good. Here's my question about Halep: Would she be top 4 if you couldn't get on-court coaching in WTA events? I'm not going to go on and on again about how much I hate on-court coaching again, but Halep does a lot better when Darren Cahill is talking her through a match. But what about Grand Slam events? Last year, she failed to get past the quarters in any major event, losing in the first round in Australia. But she won three tournaments, including Madrid. So it's a thought -- a thought that if you use a crutch long enough, it becomes hard to remember how to stand on your own feet. Like I say, a thought.
I have thoughts about Venus Williams, too, and they're a bit more upbeat. It looked like Venus really began to build points and consistency last year. Some of her losses last year were spectacular -- not in a "wow, that was a trainwreck" sense, but more in a match quality sense. She started her career as a wrecking ball, hitting through everything and then she seemed to falter when people began to handle it. But in her fourth-round loss to Pliskova, she showed some real balance in her power and strategical skills. Just enough balance that she deserves mention here. She doesn't tend to do well here, but I'd love to see what happens if she and Halep play in the fourth round. And then there's the barber Svetlana Kuznetsova. Her kind-of comeback (she's always sort of been around) has been great to watch. She's a great player and pretty entertaining in case you hadn't heard.

OK. So some first-round matches to watch:
1. Laura Siegemund v. Jelena Jankovic: Just because it's Jankovic. It's the same reason you watch any Alize Cornet match -- for the drama.
2. Kristina Mladenovic v. Ana Konjuh: Konjuh is the one who crashed onto the scene last year at the U.S. Open. Mladenovic has been playing great doubles and not so bad at singles, pushing Serena hard at the French Open last year. Should be good tennis.
3. Sam Stosur v. Heather Watson: Who knows which Sam Stosur will show up? Who knows which Heather Watson will show up?