OK. You might have heard a little bit about Nick Kyrgios' performance at last week's tournament in Shanghai. If you haven't, here's a video highlighting his "level" of "play."
At first, those in the tennis know felt that the $16,500 fine first levied on him was a bit weak, but then yesterday, the ATP brought the hammer down. It fined him an additional $25,000 ... and ended his season. Kind of. Kyrgios was banned from the sport for eight weeks. He will be allowed to return one day before the Australian Open. This is the ATP saying to Nick: 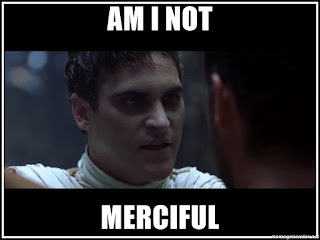 Even more merciful still, the ATP has offered to reduce the ban to three weeks if he would submit to psychiatric care. Nick's statement is like, "See y'all in 2017," so I guess that's a no.
So it's time for us to talk about Nick. In a profile the New York Times did about Kyrgios, he tells the writer that he doesn't know his racquet head size, and it appears he knows little about the strings he uses. The best tennis players in the world are almost always students of the game and its history. Roger Federer. Rafa Nadal. Serena Williams (and she wasn't always). But if you want to do something well, you learn about how to do it, and who before you has done it.
Kyrgios has said he doesn't like tennis, that he'd rather be playing basketball. Why doesn't he just play basketball? Seriously, I'm asking. I have no idea.
The temper doesn't bother me so much. First, it sort of flies in the face of the idea he doesn't care. Also, we loved John McEnroe for being a jerk on the court. It gave tennis an extra dimension. For some reason, tennis has this reputation of being a "gentleman's" sport. We wave off our accidental winning shots. We shake hands when it's over. But most people I know don't feel very gentlemanly about tennis when they're playing. They are trying to win. And unless you're dealing with a complete jerk, it's almost universally understood that any anger displayed is meant inwardly, not at your opponent. (Unless you think Novak Djokovic was really mad at Roberto Bautista Agut over the weekend in Shanghai.) Yelling at fans is wrong, though, and inexcusable. They literally have paid to sit there and listen to you yell at them.
The larger sin for most, including me, is this nonsense about not giving it a good effort during a match. There are two things that irritate the hell out of me when I see it on a tennis court I am occupying. 1. Cheating. Because just don't even bother if you're going to cheat. 2. Showing a lack of effort, or showing that you're just not interested in our match. Then leave. I've got other things to do, you've got other things to do, and I think I'm decent enough that you could stop looking at your cell phone for a second. On the pro level, this sentiment must be emphasized by a thousand. People are paying good money to watch you play. Your opponent wants to play well and likely is trying to improve his lot in the rankings. This is not a situation where your laziness/lack of concern/whatever your problem is is affecting only yourself.
Kyrgios is uneducated about his sport. He's rude. He bails out of matches and says terrible things to people. All of that is true. Here's why I'm willing to give him a few minutes to settle down: He's a kid. He's 21. And he's a male, so it's a given that mentally, he's really, like, 15. For some reason, we expect our athletes, even the young ones, to be fully formed when they emerge onto the scene. This is probably because they are physically strong and most likely able to do things that we can't do and that's something we can see plainly. So when they show an incomplete or malformed personality, we just can't believe it. But they are undergoing a maturation process, like any other human. Among the things he needs to assess -- the main thing really -- is whether he wants to play tennis. If the answer is no, well then, That probably would solve about 100 percent of his problems.
There's hope for Nick. Back in the day (like seven years ago), there was this player. Let's call him Novak Djokovic, because that is who I am talking about. He was tagged by top analysts of the game as an up-and-comer, with a megaton of talent. There was one problem, though: He bailed out of matches faster than I dodge mowing the lawn, even after he won a major. He was known for showing little effort, or just quitting, claiming some niggling injury. A lot of people wondered if it was going to be his lack of effort that kept him from realizing his full potential. We know the answer to that question now.
Ultimately, this suspension will be good for everyone. Tennis fans want to see blood for Kyrgios' behavior and Kyrgios needs to do some thinking. I'm genuinely curious to see what a couple months off will do for him.
Posted by Naf at 9:00 AM