The most bizarre things seem to happen to Serena Williams at the U.S. Open, am I right? There was the Kim Clijsters incident, the Sam Stosur incident, the Roberta Vinci incident. And now, coming off a shaky appearance at the Olympics and a lingering shoulder problem, Serena gets Ekaterina Makarova in the first round this year. That would be the same Makarova who beat Serena at the Australian Open a few years back.

Even with an injury, it is still difficult not to pick Serena, but her draw is very, very hard. 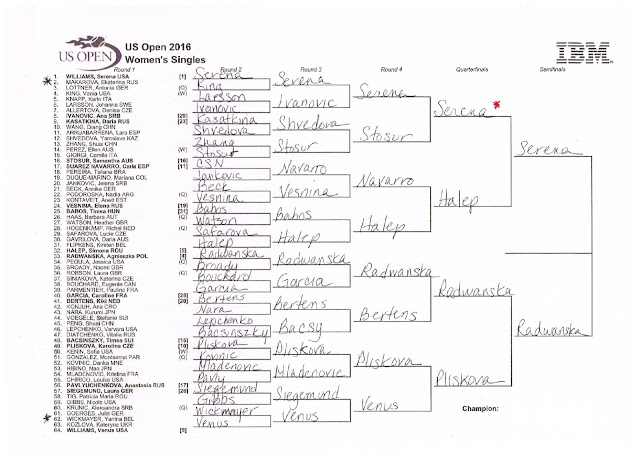 It's full of dangerous people. Well, OK, to  be honest -- these people who wouldn't be so dangerous for Serena, but given the venue, it's now dangerous. It will take the world's best sports psychologist to figure out how it is that the place where you won your first major becomes the biggest minefield of your career, but that is what we have here. There's possibly Ana Ivanovic in the third round, Stosur in the fourth, or Yaroslava Shvedova. That's before the quarterfinals. I think she'll beat Makarova, but if her shoulder is still a concern, then a deep run could be a problem for her.
Here's the bottom half: 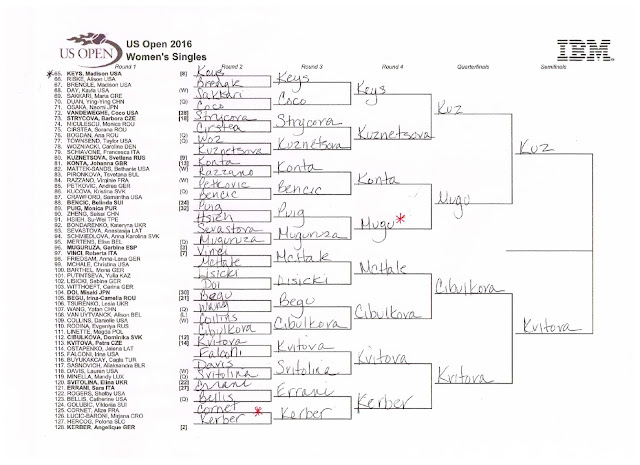 This is a really big opportunity for Madison Keys. She is in a doable section of the draw, and if she's able to take advantage and have a deep run, that would set her clear apart from the rest of the U.S. female hopefuls. She'd potentially be playing almost every single one of them if she wants to advance -- Alison Riske in round 1, Madison Brengle in round 2 and Coco Vandeweghe in round 3. Keys has blinked in big matches, but she is getting close to being a consistent challenger, and maybe beyond. This tournament could be big for her.
Now Angelique Kerber? It really does depend on whether she can survive the drama onslaught she'd face against Alize Cornet if they both win their first-round matches. Seriously, though, if Petra Kvitova is playing well (one never knows), she'd be the most likely to advance out of that draw, not Kerber.
Another dangerous player here is French Open champion Garbine Muguruza, whose head is clearly heavier, having earned a crown. She's flamed out of most tournaments early since her win. If she can stop the nosedive, she could go very far in this tournament, too. Or she could go ahead and get her clock cleaned by Monica Puig again.
There are a few first rounds matches that should be good: Williams/Makarova and Keys/Riske, but also Johanna Konta vs. Bethanie Mattek-Sands, Svetlana Kuznetsova vs. Francesca Schiavone. And then there's what I'll call the Battle of the What-Could-Have-Beens between Julia Georges and Yanina Wickmayer. Like, two or three years ago, that would have been a popcorn semifinal.
Posted by Naf at 2:00 PM