A ride in the way-back machine 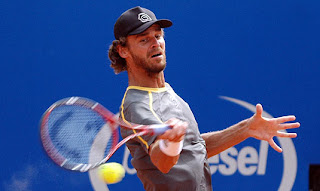 From the news wires:
Former world number one Gustavo Kuerten of Brazil has won his first match in 18 months by defeating Italy's Filippo Volandri 6-3, 6-1 in the first round of the Brazilian Open here.
The three-times French Open winner was sidelined for most of last year as he attempted to recover from a hip operation he underwent in 2004. His last win was for Brazil in a Davis Cup tie against Uruguay in September 2005.
His world ranking has slumped down to 1,076th and he needed a wild card to play in his home ATP tournament, a title he has won twice before in 2002 and 2004.
But he needed just 46 minutes to see off Volandri on the Costa da Sauipe claycourts, serving 13 aces in the process, and he goes on to play against another Italian, Alessio Di Mauro, in the second round.


Here's hoping Guga finds his way back soon. It'd be fun to see him competing again at the top. And it'd be really interesting to see him playing the French Open again, against, oh, I don't know -- how 'bout Rafael Nadal? Hmm. For old times sake, how 'bout Kuerten in five?
(And how about someone finding Guga a fat, juicy steak, once and for all? If he were a girl, everybody'd be crying Karen Carpenter.)

Maybe Nalbandian should take Guga out to dinner to show him how a real man eats.